At Captivate, Capcom was hinting at an all new area of Fortune City that Frank West would get to explore in Dead Rising: Off the Record. If you guessed “amusement park,” pat yourself on the back.

Capcom has revealed the “Uranus Zone” amusement park for Off the Record, a sci-fi themed playground of wonders and games. Oh, and yeah, and a bunch of flesh eating zombies.

While the small demo was area was devoid of any exposition, it was a good opportunity to sample some of the new and wonderful toys West can use to slaughter (and taunt) the undead. 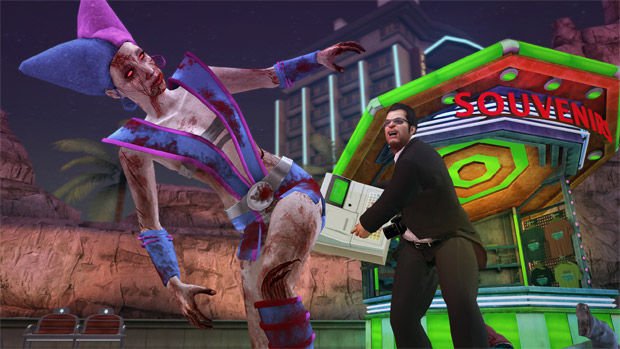 I spent quite a bit of time exploring the amusement park, particularly hoping that I could hop on a ride or ply a carnival game. I couldn’t interact with “Molemen From Uranus,” a life-sized whack-a-mole game where creatures pop out of holes on a space rock. I was able to push zombies into the weird alien squid-shaped whirly ride, but couldn’t find a way to stop it so I could go for a spin. The space-themed Jump Space 7 bar was probably also more exciting before the undead tore its bartender and customers to pieces.

Dead Rising: Off the Record is out this year. Unlike Case West, it’s a full retail experience, which means laser eyes and alien probes are probably just the tip of the iceberg.