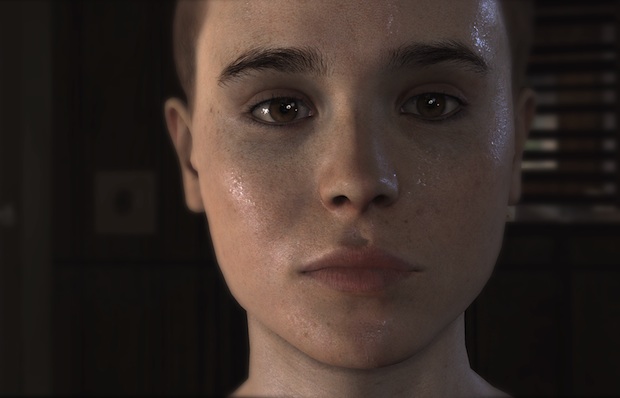 Whether you loved it or hated it, you must admit that Heavy Rain could have been better. Even its creator David Cage admits it fell short of his ambitions. He’d also be the first to tell you that its follow-up, Beyond: Two Souls, is better, and he wouldn’t be wrong.

Beyond isn’t a brave step forward for Quantic Dream. It’s more of a meditative glimpse in all directions; it’s the product of a studio reflecting on what they did right, what they did wrong, and what they can do better. How about actors who don’t sound like down-syndrome French? How about a story that has momentum, focus, and variety? How about a game that you control more than you watch?

The 30-minute demo of Beyond, showed behind closed doors, presented its teenage female protagonist Jodie Holmes in an intense couple of scenes, as she literally runs from the law. At the start of the demo, Jodie is asleep on a moving train. Instead of controlling Jodie, you control her spirit friend Aiden. As Aiden, you can float around the train, travel through windows, and interact with items in close proximity. In the demo, Aiden isn’t given a voice or personality. Who he is, is defined completely by the player. I imagine Aiden, for most players, will be a nuisance that maliciously spills hot coffee on people and steals their newspapers from them.

Regardless of what you don’t do in the game, there are certain things you must do. Cage loves to say the game is nonlinear but he is only half-right. Beyond seems as linear as Heavy Rain in play, it’s just that there are many branching linear paths you can go down. Most of the time you’ll have direct control over Aiden or Jodie, but in action scenarios you’ll be presented quick-time-event sequences identical to those found in Heavy Rain. Despite looking and playing better, there is an element of genuine surprise missing from Beyond. Though, Cage hints that this demo was only a small, action-focused piece of Beyond’s story that follows Jodie through 15 years of her life. Though the demo presented a fugitive scenario, Cage said it’s only a footnote in the game’s decade-spanning story.

Beyond is filled with details that display the passion and artistry pumping through Quantic Dream. Actor performances are top notch, with voice and motion capturing done at the same time (like Uncharted 3; unlike the awkward animation/acting of Heavy Rain). Jodie has numerous animation loops that give variety to her walking and ideal states. Animals react to Aiden’s presence, even though others are unaware. Beyond is a unique experiment in interactive storytelling. Between a script that Cage slaved over for a year and some slight improvements to elements in past Quantic Dream games, Beyond will likely be every bit as unique and divisive as Heavy Rain.

Although I find many of Beyond’s ideas intriguing, I worry about their execution. Being able to possess a cop is neat, but isn’t the novelty kind of faded if all you can do is press L3 to trigger an animation of shooting other cops? Sometimes you can walk around and have more choice, but that seemed to be the exception rather than the rule in this E3 demo. Even when there is some player agency left intact, it doesn’t seem very fun.

The demo came to a close with Aiden protecting Jodie, as she hides in a small town invaded by heavily armed police. You can blow up the car on the right, or the car on the left. You also need to blow up the car in the middle if you want to continue the story. There are other options, but it all seemed to boil down to “blow this up, instead of that; watch animation, and repeat.” That seems to be Beyond at its most open. Like Heavy Rain, there is a trade-off taking place: The player isn’t given much freedom in action, but the action is wonderfully orchestrated when it does happen.

I don’t think Beyond will change anyone’s mind on David Cage and the type of games he makes. At the end of the demo, Cage had a very apologetic tone, as if to say, “I really want to show you the weirder, narrative-focused stuff, but this is E3 so I needed to show you a big action set-piece.” Cage hinted that the game may play with player death, chronological storytelling, and aging in innovative ways. Though I can’t get stoked about hammering the trigger buttons in a QTE sequence, I’m excited to explore the narrative tapestry that connects the Beyond’s more heated moments.