Cutting is a lot of fun, especially when you’ve undergone enhancement so that your blade will cut cleanly through anything. I lose my sh*t with a 12-inch chef’s knife in the kitchen, so imagine how nuts I went when I finally got my hands on Metal Gear Rising: Revengeance.

While a Konami rep was giving us control assignments and play guidance, I was already practically gnawing on the Xbox 360 controller’s left trigger, knowing that it was the one you held down to do cutting stuff. It felt kind of like I was like playing a racer, watching as the race lights counted down to the checkered flag, with the pedal mashed down as far as it could go. 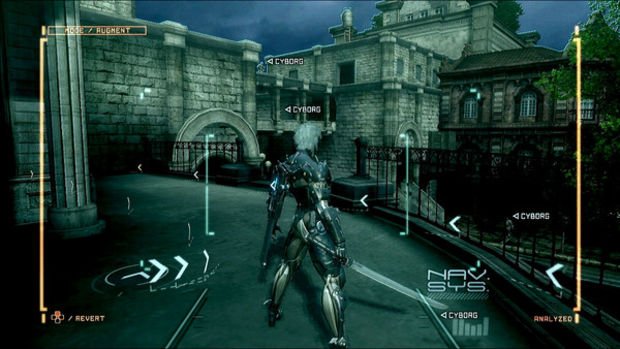 But then the flag dropped, and my cutting was suddenly wobbly and embarrassing. Talk about a buzzkill! I made Raiden — a robo-ninja that wields a katana, and one of the coolest videogame characters ever — look like a total dipshit. My slices weren’t straight at all, and looked more slithery and sloppy than anything else.

The trouble was that I was a bit too heavy on the left analog stick, which controls the blade’s slice path. But, in some testing grounds where test dummy targets were set up, I finally started to get the hang of Revengeance’s slicing. Faintly overlaid slice lines constantly move as you manipulate the analog stick along the edges of its control, and I found that if you try to follow those lines across the middle of the stick’s control, the cuts will be straighter. After awhile I was confident enough to slice dummy bad guys off of the dummy hostages they were holding. Cleanly. Carving bad guys off of good guys is delightful. 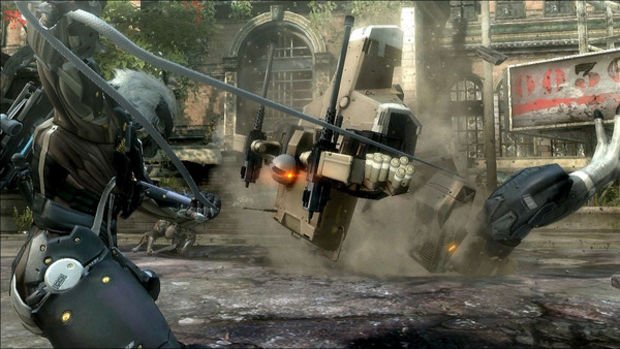 The whole hands-on demo was a sort of VR training experience. After practicing my cutting and movement techniques, the experience dropped me into combat against actual soldiers. While they moved and shot at me, they cut just as easily as the dummies did, and I was having a blast making minced meat out of them. I was getting to the point where I could aim at what limbs I’d like to cut off nicely. But when the action got a bit hairy I relied on the X and Y buttons to attack, which are assigned to horizontal and vertical slicing, respectively. They aren’t nearly as fun as the analog stick, but they’re a sure thing, and they definitely help in a pinch.

I really enjoyed the attacks that came out of contextual prompts. One had Raiden kicking an enemy upward if correctly input, giving him ample opportunity to jump above this enemy and slice him to pieces in slow motion as they both fell toward the ground. Imagine looking down on an enemy from above as he slowly dropped below you, positioned like a rag doll. Quick thumbs will let you slice enemies in this state to nothingness. So great.

The training challenge escalated into a sort of mini mission that had me trying to find a code hidden on one of the stage’s troops. I sliced up plenty of them, but the guy I was looking for was hidden under a cardboard box. Classic.

Later, I laughed out loud when when the training mode tried to give me advice on taking out a huge hopping Gekko. Before it could finish one line of instructions I was already pulverizing one of the Gekko’s biomechanics legs. I mean, there’s other things you could do, but why mess with them when slicing is so fun? 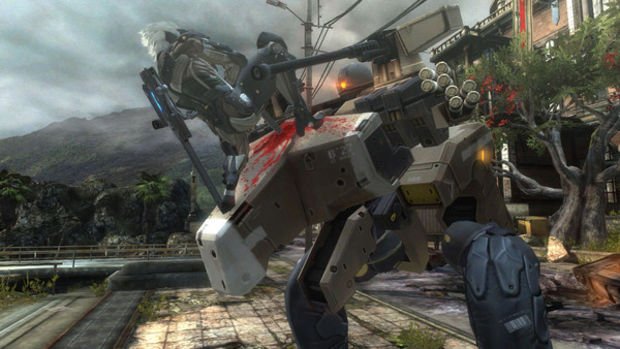 The training mission’s finale had me running down a crumbling bridge, which was pretty easy with Raiden’s super-speed Ninja Run. In this run, I could dodge and cut on-the-go, in true ninja style. This sprint eventually led me to a fight where I was stuck trying to take down a helicopter. Katanas aren’t much help against flying craft, but the stock of ample missile launchers did the trick.

Revengeance looks and sounds like a Metal Gear game, but make no mistake: This is a Platinum Games property through and through. Is that a bad thing? No, not at all. This game manages to bring together the world, back story, characters and play styles that I love into one insanely over-the-top offering. I dare you not to have fun with this game.