Seriously, don’t blow off what I’m about to say. Yes, Thor was horrible. Just a waste of space. I don’t know what the hell Sega was thinking letting the game through in the state that it was. This isn’t about Thor, though. This is about the Captain America videogame and how it actually has promise.

I only played about ten minutes of the game, and it may be because I had little expectations going in, but I was really impressed by the game — especially with the fighting system. It’s very much like Batman: Arkham Asylum’s combat mechanic, actually.

The controls are pretty simple. A on the Xbox 360 lets you dodge attacks, X is punch, and Y lets you grab enemies. B is a counter attack that can be performed if you time the move right, which you should be able to do easily — enemies that are about to hit you flash yellow. You also have your shield of course which you can throw automatically or aim at targets with. Nailing attacks and counters will fill up your focus meter (represented by a blue bar) which allows you to perform strong attacks on enemies.

Fighting a group of bad guys is very seamless since you bounce from one enemy to the next, very much like in Arkham Asylum. The graphics are pretty damn good, and show off the pain in character’s faces well, like Baron Strucker as I made him electrocute himself by shoving his own electric hand into his chest during a boss fight. 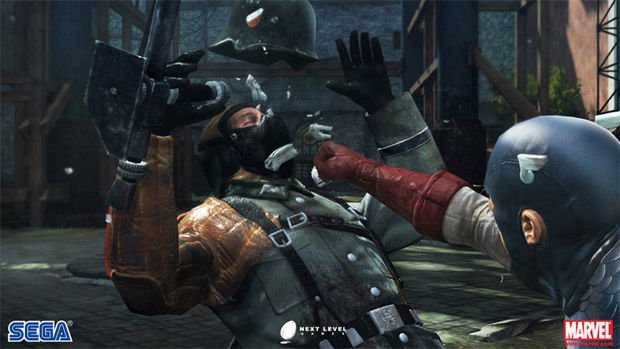 As for the story, it’s actually penned by a Marvel writer and revolves around the same plot as the upcoming movie, minus the origin story stuff in the beginning. Chris Evans and some of the other actors from the film lend their voices to their respective characters in the game as well.

I also tried out the Wii version of Captain America and I was less impressed with that. Understandable, though — the Wii version is aimed at a younger audience. Still, that fact doesn’t excuse the choppy visuals. I did like how you can throw Captain America’s shield independently of the character’s movements by targeting with the Wiimote.

If you don’t believe me when it comes to Super Soldier, I understand. Hell, I wouldn’t believe me if I was in your position. I’m going to hit up the Sega booth at E3 and get you some actual video of the combat in action, so watch out for that soon.