Two years ago at E3, the original Borderlands came out of nowhere to be one of my favorite games from the show. And despite the numerous issues with that game — including, but not limited to: experience-level balance, its underwhelming conclusion, and some downright wretched DLC — it remains one of my favorite first-person shooters because, when it comes right down to it, Borderlands was just stupid fun.

Based on my experience playing Borderlands 2 at E3 2012, the game feels like the next logical step. It’s more frantic, more visually interesting and much more alive than its predecessor. 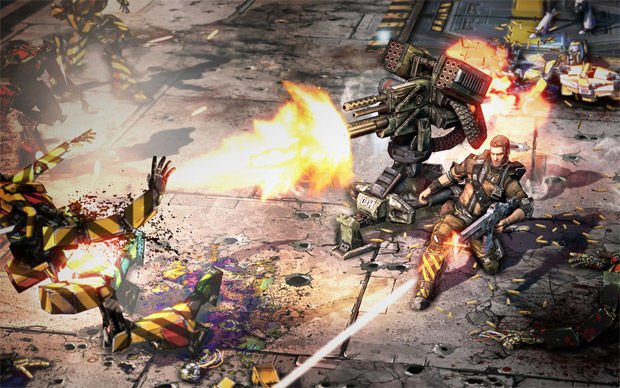 The hands-on demo at the show this year consisted of a mission in which two players (in this case, myself and and that lovable panda-man Brett Zeidler) were tasked with destroying statues of the villainous Handsome Jack in order to diminish his standing and wipe that smirk off of his face for a bit. The always lovable Claptrap acted as a guide character, giving us instructions over the radio and supplying bits of humorous dialog at mission checkpoints.

Because I’m a fairly boring individual, I went with the most straightforward character selection, the Commando. Very similar to the Soldier class from the first game, the Commando is well rounded and works best for medium range combat. Brett opted for the Siren class and we started on our mad adventure.

Pandora — or at least the specific region we were able to romp in — is far more alive than on our last visit. The cities of Borderlands were ramshackle in their construction, built from scraps of metal. By contrast, this locale was sleek and futuristic, with planters full of greenery and winding paths. That sense of life extended also to the enemies, particularly the humans who would drop chuckle-worthy quips as they collapse to the ground or melt into a puddle of goo. 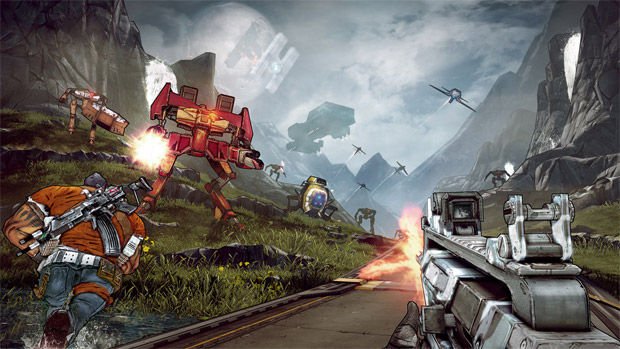 Being that the goal was to destroy statues, the natural inclination was to just start firing off ordinance. This was ineffective, however, and Claptrap tasked us with finding a construction robot which we could assume control over and use to accomplish the goal. The “Constructors” are massive ovoid robots with a central, laser firing eye capable of delivering considerable damage, but their size and limited ability to turn makes them somewhat easy targets, meaning that we would have to defend the constructor from enemies while it destroyed the four statues in our mission.

Now, I know it’s been a while since I played Borderlands and maybe my memory is clouded by how powerful my characters had become by the end of my time with that game, but this seemed a fair bit more challenging than I remember. Our enemies consisted of a series of increasingly large and powerful bipedal robots as well as combat engineers. The AI of the robots seemed fairly dense, but the humans at least made some effort to avoid being shot. I, on the other hand, did not and went down several times during the course of play. It was embarrassing, really. Almost as much as watching Brett walk right past my dying body and into a hail of gunfire which brought him down as well. Served him right.

We survived but actually wound up failing the quest. Not because we were unable to destroy the four statues; that worked out in the end. Sadly, our Constructor was destroyed almost at the same time as the final statue, making us unable to accomplish the quest’s last task: flipping a switch to make the Constructor dance. You could argue that we technically succeeded, as the real objective of diminishing Jack’s influence in the region was accomplished, but we didn’t get to check out those sweet dance moves. I’m crushed, of course, and that only fuels my desire to play through the final game. And I will, when it releases on September 18th.