I hated American history class in school, but I would have probably enjoyed it if Connor, Assassin’s Creed III’s protagonist, showed up in more of the stories and blew up more Brits. He’s half-English, half-Native American and all kinds of pissed off, which makes for some interesting stuff already. But how his assassin story intertwines with the American Revolution is way more interesting than dudes with triangle hats topping curly white hair. 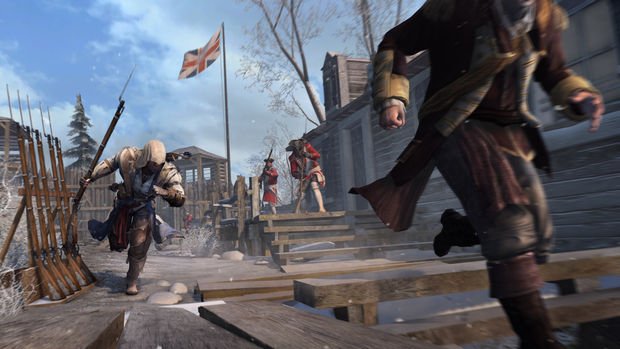 We saw a short hands-off live gameplay demo that had Connor running through the heavy snow of the American Northeast, quietly making his way through dense trees and varied wildlife. He used new weapons, like his bow and bayonet, to take out deer and wolves. Some close-combat with wolves took place, with contextual button cues coming up for dodging and throwing of the beasts.

These animals served as a warm-up for the main event. Connor continued to move through the snowy forest to infiltrate a fort where the Templar Silas was held up, with the eventual goal of taking him out. On his journey, around him, story branches progressed. Battles took place in the background, and optional quests from NPCs presented themselves, with both being somehow tied into the main experience. But, for now, the plan was to get into the fort before Silas headed out that night. 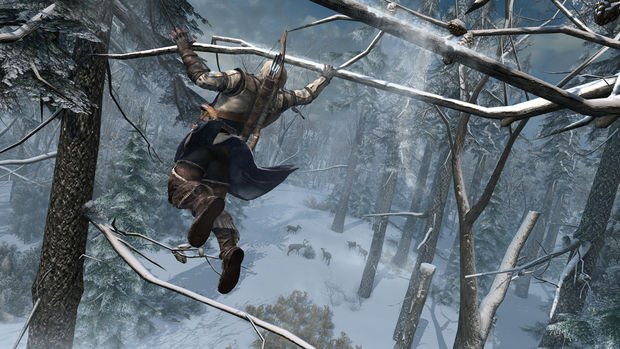 Outside the fort’s entrance Connor showed off some of Assassin Creed III’s improved combat, which Ubisoft says has been tweaked to be as fluid as possible. In a move toward that fluidity, tools can be switched with new button combinations, and now all weapons can be used in assassinations. Connor used a few new items, like a hook rope, but I enjoyed the tomahawk use the most, especially when it went into the faces and throats of some enemies he encountered.

In working his way over a cliff to the fort, we saw an increased level of detail in AC3‘s climbing. Ubisoft says that we can look forward to more uneven, realistic shapes in rocks and cliffs, and that they will look more natural with the placement of trees and other objects. There are also steep surfaces and clearings that Connor can slide down. He did this after climbing along a cliff facing the water, where several ships were at bay.

The fort assault happened pretty quickly. Connor climbed up trees to a rooftop to check out the fort lookout. While the Brits were completely off guard, he shot an arrow into a bunch of exploding barrels in the middle of the fort, and the resulting explosion sent them running. From here, Connor was able to move into the fort and take out enemies individually. How good is this guy? Let’s just say that he could grab the Redcoat’s guns and take them out with their own weapons before they even knew what was happening. The demo ended with a fantastic slow motion dive stabbing using the bayonet at the end of one of the guns. 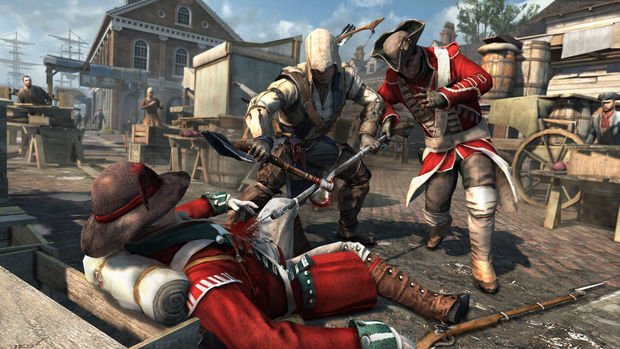 This was but a short look as a bigger reveal is planned for E3, but we did manage to get a few game details out of the game’s producers.

First off, they teased that the American Revolution was not just fought on land. Remember those ships at bay I mentioned earlier? Let’s just say I hope you don’t get seasick!

As far as the game’s size goes, ACIII‘s producers call it “a monster,” saying that its frontier is about 1.5 times bigger than Rome was. Space wise, they claim to have blown their budgets. And as far as the length of the single-player story goes, they said that Assassin’s Creed II had a good completion rate overall, so they modeled this game’s length after it. So, expect about the same amount of single-player gameplay. But, if you count the missions and other side content, Assassin’s Creed III’s length will be “well above” any of the previous series games.

While big changes and improvements were apparent in this early demo (the producers told us we were seeing early alpha), it feels like we haven’t seen anything yet. We’ll finally get our hands on this game this week at E3 to let you know where it’s going.