I swung by the Perfect World booth yesterday for a PC gaming trifecta. You may remember Perfect World as the publisher of 2009’s Torchlight. They are best known for distributing MMOs, and their demonstration didn’t indicate that they will be branching out hardcore in the near future. However, they will be publishing Blacklight Retribution, a first-person shooter, to test other waters.

I sat down for a rapid-fire look at three of their upcoming games. Hit the jump for my impressions. 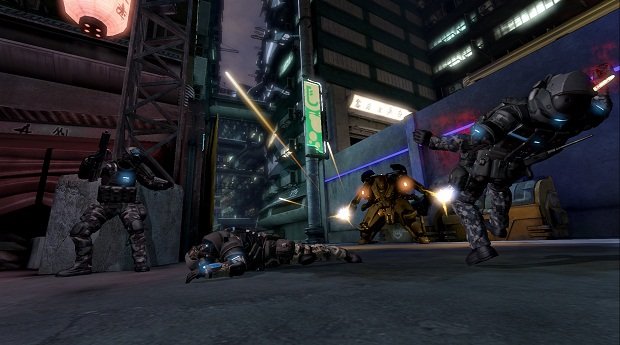 Blacklight Retribution, developed by Zombie Studios, is the sequel to last year’s Blacklight: Tango Down. Jim Sterling didn’t exactly have nice things to say about the original, but this sequel is a chance to rectify some of those shortcomings.

As before, there are extensive customization options — everything from clothing, gun stocks, and gun graphics can be tweaked before a match. You have a variety of weapons to choose from initially, but my weaksauce shooter skills ensured that I no weapon I chose would give me any kind of advantage.

We got dropped into a team firefight, and I played around with the game’s shop system and the “Hyper Reality Visor.” By visiting one of several shop kiosks on the map, you can buy different weapons or even a Hardsuit, a small-scale mech you can summon from the sky, ride around in, and use to tear through opponents like paper. You have to be in an open space to summon the mech, and there is a delay before it arrives, giving opponents a chance to take you out and jack your ride.

“Hyper Reality Visor” is the name of the game’s X-ray vision. For small chunks of time, you can see through all the walls and note the locations of all shop depots, teammates, and foes — friends will be blue, while enemies will be orange. It is what was described to me as “legalized cheating.” Since everyone has access to it, though, no one is at an unfair advantage.

Again, my shooter skills are damn near nonexistent, so I couldn’t tell you much more beyond how badly I kept getting schooled. 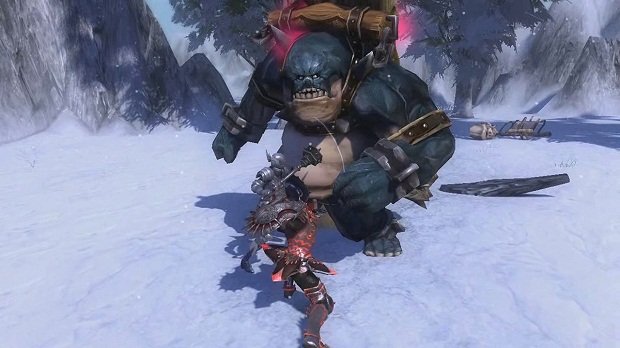 The last game that was shown to us was RaiderZ, a Korean monster-hunting MMO. If you started thinking Monster Hunter just now, you wouldn’t be far off. It felt like a cross between the Capcom games and action RPGs like Phantasy Star Online.

You move with the WASD keys, attack with the left mouse button, and select magic with numbered hotkeys. In other words, just what you’d expect. You do have access to a dodge move by holding the right mouse button and pressing one of the directions.

For the demo, I was stuck playing a cleric. I was supposed to be healing my partners, but the demo allowed us to respawn infinitely so… pffft! No point in that, right? Anyway, we got tossed into a field with a whole bunch of orcs that started running us down. For some reason, enemies not immediately in front of us and looking the other direction didn’t respond to the commotion at all. Early build bug? I prefer to think they were honorably waiting their turn.

There were two bosses. The first was a stone golem that could only be damaged by hitting the glowing purple jewel on its chest. You can’t just run in and hack away, however. You gotta plan your attacks carefully, especially since many enemies have grappling moves that can take a huge chunk of your health in a flash. The second boss was a moderately sized dragon, and here’s where the game really started to feel like Monster Hunter — run in, hack away, dodge roll out, collect yourself, then run back in.

One feature I really enjoyed was that enemies would sometimes drop their weapons, allowing you to pick them up and use them. One of my party members managed to cleave off the dragon’s horn, then he began stabbing the creature with it. I kept seeing Wind Waker flashes at this point. 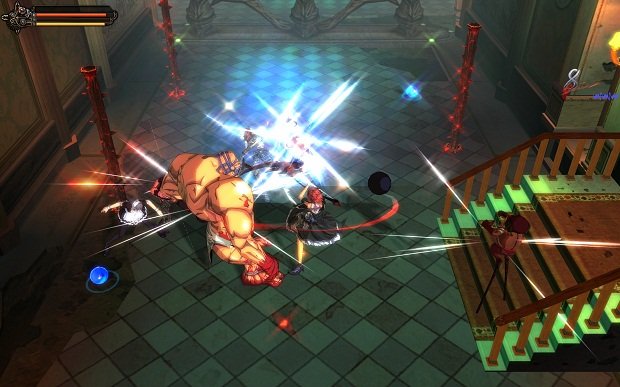 Rusty Hearts was actually the first game demoed, but it was the one I enjoyed the most. It is another Korean online game, though this time with a very heavy anime flavor. It may be online-driven, but it shares more in common with brawlers such as God of War or Castle Crashers. The style is a very slick, punk Gothic like later Castlevania titles.

For this demo, only two characters were playable — a witch with a penchant for big, sharp things and a dude who lets his fists do the talking. However, there are a lot of customization options to distinguish players from one another, such as hair color swaps and wild costumes. How wild? My alt costume was a giant cockroach, someone else’s was similar to Kratos’ Cod of War, and yet another’s was… I swear… friggin’ Pedobear.

The game can be played with the keyboard and mouse, but it’s optimized for and feels so much better with the controller. You’ve got an attack button, a jump button, a guard, a magic, and various combinations thereof. You string together combos smoothly, and everything moves at a rapid pace.

The levels themselves can be a bit labyrinthine, with multiple paths and doors that open up after you clear a room. Just from the level I played, there’s not much beyond hacking and slashing from room to room, but you know what? I like that. I just want to get a group of folks together and smack the ever-loving piss out of fools.

Perfect World is pushing the free-to-play online for all three titles, so there’s very little risk to give them a run once they drop. The closed beta for Rusty Hearts begins next month, while Blacklight Retribution and RaiderZ should be on their way very soon.