When Ascend: New Gods was announced, the trailer didn’t do a great job of getting many people excited. The boring fantasy setting and rather dreary visuals combined with action-heavy gameplay sounds like something that was just churned out to make a quick buck. I wanted to give it a shot, however, because Signal Studios’ last game, Toy Soldiers, was anything but a disappointment.

I got some hands-on time with Ascend on the show floor and as it stands now, it is underwhelming. The game is still in its early alpha stages, so many of the mechanics weren’t actually in place yet. They sounded neat when described to me, but without getting to experience them myself, I left feeling a bit drab.

One of the first things that caught most peoples’ attention from the trailer was the idea of asynchronous multiplayer. In fact, that term seemed to be used frequently throughout the show this year. Ascend: New Gods has a bit of a Demon Souls aspect to it, allowing you to see ghosts of other players and what they’re doing if you’re in the same area they are.

The interesting bit is that these other players can both help or hurt you. Anyone can place a shrine down in the area that will transport into someone else’s world and can give them a buff to things like strength or health. They can also banish enemies from their world and into yours if they want to grief you instead. This is one of the core elements of Ascend: New Gods, but I barely got to play around with it during the brief demo at E3. 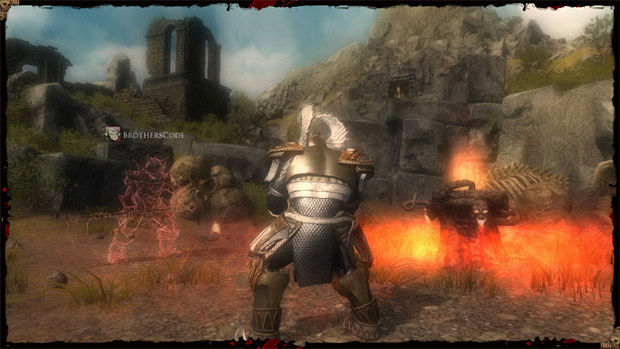 As you kill things and level up, you’ll be getting experience and gold, allowing you to buy abilities and items to customize your character however you’d like. There will be a “prestige” mechanic in the game as well, allowing you to sacrifice your character to the gods and start a new one. However, in Ascend, your prestiged character doesn’t just go away; your character will invade another player’s world and act as an aggressive AI opponent. This makes the idea of prestiging (oh god, how is that a verb) more than just boasting rights and actually useful instead.

Another not-yet-implemented feature is the use of Microsoft’s new toy, SmartGlass. While Signal Studios isn’t completely sure on just how exactly SmartGlass will be used (or they just wouldn’t tell me), it will be used to display some extra information such as the world map.

It sounds like Ascend: New Gods is looking to include a lot of neat features in the full game, but I didn’t get to demo most of them, except the gifting/griefing system which was still a bit shallow at this stage. The graphics don’t do anything for me and neither does the initial combat mechanics, but the ideas behind the game might have some weight once implemented. Ascend: New Gods will be on my to-watch list, but as of now, I can’t say I’m really looking forward to this one.