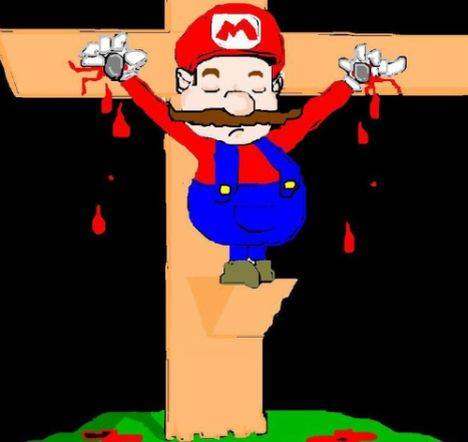 If you were to take a look around the World Wide Web, one of the most talked about highlights now isn’t the coup that Microsoft sucker punched Sony regarding Final Fantasy XIII, instead it’s this topic: Nintendo and Miyamoto have left us hardcore gamers down. They only had Animal Crossing and some fruity music game that the Man-Child genius Miyamoto unleashed on a stunned lethargic video press. Let’s ridicule them. Offer our unique insight at what we think of a music game clearly not catered to your demographic.

It boggles my mind that people are shocked, surprised and shell shocked that Nintendo, the company that built Mario, Zelda, and Metroid, are stunned that they didn’t have titles geared to the hardcore gamer out there. I mean c’mon, these hardcore gamers are the same ones that buy games like Zach & Wiki, Bloom Box, No More Heroes, Beyond Good & Evil and Psychonauts by the truckloads, right? The same ones that still say Wii is a fad. The ones that ridiculed the Nintendo’s DS when it first came out, right? Are you kidding me? Seriously, are you?

Nintendo has put out more quality first party titles in the Wii’s two year lifespan than both Xbox 360 & PS3 combined on theirs. Super Mario Galaxy, Mario Kart, Twilight Princess, Metroid Prime and Super Smash Brawl are bona fide AAA games. I won’t even count the smattering of really good third party software that’s unique to the system but doesn’t sell (though I did mention some of them in my last paragraph). What did you expect? Oh yes, that Kid Icarus game, and what else? Some other supposed hardcore game that was rumored? The fact of the matter is Nintendo can afford to take their time creating a new game. Which is probably what they are doing. More developers should take note of taking their time before unleashing a bug riddled game.

Pikmin’s been confirmed as well as other mysterious games that they, at this point are not entitled to reveal. What’s wrong with that? Would you have preferred an all CG trailer, like God of War III, teasing you of a new Kid Icarus or possible new IP? If you don’t think they’re making more games for the Wii that you’re going to like, you’re crazy. And while we’re at it, these E3s of late you’re getting confused with the pageantry and excess of the E3s of the past. They’re not the end all and be all of the videogame industry anymore. That’s why this year’s show was a letdown all across the board. The days of shocking revelations (aside from a porting of FF XIII) of upcoming games being debuted at E3 are over folks. With this thing called the Internets we’re plugged into game developers more than ever and get our news daily, if not by the minute.

But did Nintendo really have a poor showing at E3? Even though you may trash Animal Crossing, that game will sell a mess load of games. I’ll be buying one of them, day one guaranteed. Even though it wasn’t in the presentation, MadWorld looks crazy cool with it’s Frank Miller style visuals and excess over the top violence. That Wario Land Shake It! for the Wii looks amazing with it’s 2-D environments of old and cartoon like characters. I know I’ll pick up Wii Resort just to try out that sword fencing like game, as will many others.

And finally Wii Music. The game that everybody is dissing. Mark my words, this game is going to sell like hotcakes, hotcakes with large amounts of bacon and sex with an ice cold beer. Why the hate? This is for the kiddies. You do realize that, right? That’s like ridiculing a Bratz or Barbie game. It’s not for you. It’s not even for the casuals (even though they’ll fall in line). It’s mainly for the kids. A music game that wont frustrate them like Rock Band or Guitar Hero will. My God, there’s no skill involved because of a lack of inputs on display and that’s the point. It’s got Yankee Doodle Dandy for crying out loud. Is it mild interactive software at best? Probably. Will you play it with your kids and have a laugh or two with them? I’m sure you will. And so will a horde of parents and grandparents come this Christmas.

If you really want to focus your all encompassing gaze at companies that may endanger your hardcore way of videogame light, may I suggest Sony or better yet, Microsoft. Their whole Dashboard upgrade was a knee jerk reaction to Nintendo’s strategic wooing of the young and casual crowd. Nintendo got it from the beginning. Now others are emulating it. But with Nintendo, this has always been the case, for others it feels reactionary at best and retarded at worst. I like the clean look of the Dashboard but the Avatars on the 360 stick out like a crackwhore in a convent. This from the company that was clowning Sony for Home and they are doing a hybrid of Nintendo’s Miis and Home Jr now.

Ask yourselves this: Didn’t this E3 seem like a show to see who could be more like Nintendo?

Has the mainstream videogame media been too harsh on Nintendo?

The answer to that is of course is that they are being too harsh. I mean, let me get this straight; they are blowing away their competition by a stupid factor and yet we are still telling them what to do? I don’t know about you, but there’s something wrong with that picture. It’s almost comical in a way. Stop doing what is lining your pockets full of dough to cater to us core gamers, that really associate ourselves with the hard hitting consoles that feed our more adult tastes of violence, mayhem and online shenanigans, so we can ignore most of your stuff unlike the demographic that’s buying now. Yeah that makes sense.

I don’t know about you, but I bought a Wii for Nintendo’s first party games. They delivered. But more is coming. I’m patient. A lot of the hardcore Nintendo loyalists apparently aren’t. I’m going to throw my Wii away…Boo hoo. Grow up. Stop throwing a tantrum because you didn’t get your way. Silliness abounds.

The REAL Hardcore are Nintendo fans. Know why? Because they know Nintendo strives to be different in a videogame landscape of me toos. They brought the rumble pak, they pushed 3D into your living room, the greatest games of all time have resided on a Nintendo console. In ten years from now, on whatever handheld we’ll have then, what do you think you’ll be playing on it? Super Mario World or Halo? Nintendo to me have always seemed either demented or just genius. Time seems to cement the latter for them.

Are the mainstream videogame media too full of themselves and out of touch?

The too full of themselves query is subjective, I leave that open for you to contemplate. The out of touch one may be a different story. We, as gamers everyday get older. No newsflash there that’s for sure. But just as there’s really, in actuality not that big of a divide between hardcore or casual, there is a very significant one between young and old. Or for lack of a better analogy, between twenty cents and twenty dollars.

According to the ESA:

Sales of “family entertainment” video games more than doubled in 2007, making it the fastest growing segment of the video game market.

With Ninety-four percent of game players under the age of 18 report that their parents are present when they purchase or rent games.

And the most staggering figure here:

According to a PricewaterhouseCoopers report:

*$48.8 billion — The amount of revenue expected to result from “Family Entertainment” portable software sales by 2011.

Out of touch? That might be a real possibility.