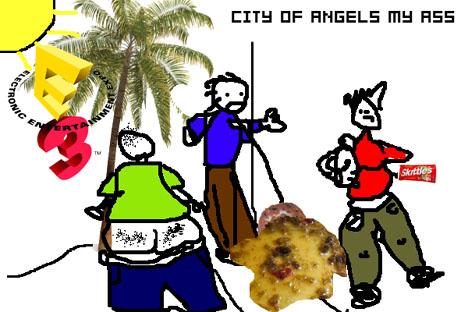 The general consensus is that the 2008 E3 Business and Media Summit sucked. And everyone you asked had their own reasons to say so. Some took issue with the ghost town of a convention hall, which seemed lifeless compared to previous events. Others were cranky about scheduling conflicts and travel. Many weren’t pleased with the “show floor,” and had hoped to see more games.  Even our own Anthony Burch says that he thinks that this should be “the last E3 ever.”

I don’t know if it was all that bad for what it was supposed to be. It’s a business event, and they’re supposed to be kind of crappy, right? We’re just happy to be able to go and do our thing. Besides, Team Destructoid has a way of making even the most disappointing event pretty fun. We get in, do our thing, and then get out, leaving our Destructoid stickers and a trail of amazing robot photos behind. If anything, I’d score E3 2008 as “moderate good times,” and then be done with it, shifting my focus and hopes to the upcoming Penny Arcade Expo.

That being said, Destructoid’s E3 2008 is not without its horror stories. But, unlike other videogame outlets, our complaints have less to do with the actual event and more to do with its location. I swear, sh*t like this only happens to us.

Hit the jump to read a few of our horror stories.

No one can re-tell these stories as well as the ones who actually experienced them, so I’ll let them do the dirty work. After that, I’ll follow up with my personal series of nightmares, which include public shitting, potential muggings, and wall vomit.

Jonathan and Colette abandoned me with my phone dead in Burbank accidentally while following them on the highway. So I circled warehouses until I found a croissant bakery-slash-cell phone dealer-slash-music store that had a wood table with all this stolen shit. Niko gave me special price and a sneer. I bought a car charger for my phone cash and ran into the arms of Chad.

Sadly, on the day I went to pick up my badge the second train was undergoing maintenance and I had to exit about fifteen blocks from where I was trying to go.

Usually this would be no big deal as I could use the exercise, but the path from the subway station to the Convention Center went trough a particularly shady part of town. Even though I was a little nervous, I figured everything would be fine since it was the middle of the day.

As I walked down an unusually quiet street I noticed a homeless man approaching. Once he got closer I realized that the homeless man had on an actual trash bag as a shirt. Seriously, he had even poked out perfectly-sized holes for his head and arms.

Before I had a chance to smile and acknowledge the man’s creativity, the homeless guy asked me if I had a nickel.

“No, sir, I am so sorry. I don’t have anything on me,” I politely responded.

All of a sudden, out of nowhere, the man screamed as loud as he could. “DO YOU KNOW WHO YOU ARE TALKING TO?!”

Confused and slightly afraid, I paused and then slowly answered. “Um … you?” I really didn’t know what to say.

Now, what happens next is the honest-to-God truth.

After my response, the homeless man’s face filled with a kind of rage I had never seen before in my entire life.

Without any explanation, the man grabbed the front of his trash bag, screamed at the top of his lungs, and ripped the shirt off of his body. And when say “ripped” I mean he actually grabbed the shirt at his chest and tore it in half as he pulled his giant clenched fists in opposite directions.

At this point, two thoughts went through my mind:

1. I am about to be killed on my way to pick up my E3 badge.
2. How does this homeless man have such giant pecs?

Once the shirt was completely off, the homeless man screamed again (I am talking extra loud, crazy person yelling) and lunged at me.

I don’t know why the Olympic track & field stars don’t wear Abercrombie & Fitch sandals, because the ones I had on almost left a trail of fire behind me I got out of there so fast.

Luckily, once I ran out of breath a couple blocks down the road, the Incredible Hulk of homeless people was gone. He may not have even chased me, but I was not going to slow down to check.

Shaken up, but secretly happy I had a good story to tell, I made my way to the Convention Center and picked up my badge.

Even though he tried to pummel/rape/kill me, there will always be a special place in my heart for that crazy homeless man and his amazing breakaway trash bag shirt …

Dale in Fuck GPS in LA:

I ran into Japanator’s own Heidi Kemps after a Square Enix event. She was there with coworkers from another outlet she works at, covering the event for their publication. She introduced me to a colleague, a Russian journalist. After chatting over lunch, I proposed that we all head over, on foot, to the next event we had to cover, which was EA’s press conference.

The “cool thing” to do at E3 2008 was to have your event offsite, and not at the Convention Center. It was only a couple of blocks to the Orpheum Theater, where EA had their thing, so I proposed that we all walk together. I had to go and brag about my nifty new in-phone GPS, and how it would get us there safely and quickly. Later I had to eat my words.

After walking in the wrong direction at first, we corrected ourselves and headed down a street. We were chatting and not paying attention, and we became lost. We pulled out the GPS and tried to find our way on foot, eventually getting turned around on a series of one-way streets. Later we found that the GPS had a totally incorrect address for the theater! To make matters worse, the GPS would not track us accurately enough to find our way. By the time we discovered that we were going the wrong way (again), we were already late. We finally arrived almost halfway through the event, drenched in sweat from the punishing California sun.

Dale in The Longest Walk:

An offsite event ended in the early evening one day, and so I decided to skip trying to find a cab and walk five or six blocks back to our hotel in Little Tokyo. The sun was starting to set, and there was a nice breeze, so I thought a nice walk would be fine after a semi-stressful day. Boy, was I wrong.

I set out on a street, and things were pretty peaceful and calm. I noticed a slight incline on this street after about a block, so I moved down one street to avoid the hike. It was on this street that someone began to tail me. I couldn’t get a clear look, but I’m sure he noticed that I was a) alone, b) in a suit jacket, moving slow, and c) carrying a laptop bag. If I would have stayed on the steep street, I probably would have never encountered this guy. Eventually I lost him, though.

On the next block, a large man came into view. Imagine my surprise to see his ass hanging out of his jeans. Wide ass, that is. Wide, black, and hairy. He walked about 200 feet up this street with his ass hanging out. He walked directly in front of me. He suddenly stopped alongside two construction workers sitting on the sidewalk and squatted. Hairy ass man proceeded to take a shit right there on the sidewalk. What was really crazy was that the construction workers and passers-by were not surprised in the least. Naturally, I wanted to hurry past this spectacle, but a crazed lady with a baby jumped in front of me and offered “my choice” of candy. She suggested the Skittles, for $2.00 a bag.

Scared for my life, I moved right, to the next street up, hoping it was safer. I was only about two blocks away from the street my hotel was on, but I feared I was still a ways down from it. My GPS was no help. I looked up from the useless GPS to see a homeless man wearing a knitted cap. He was speaking to me, but not facing me. He started to walk with me, trying to converse with me, making really strange hand gestures. He got increasingly angry, and I found myself wanting to cross the street. Unfortunately, I was stuck at a light, at a street to busy to dart across. He stood right next to me, mumbling loudly, and then suddenly stopped. He ran behind a large metal electric box and peeked over the top at me, staring at me. I was scared shitless, but couldn’t cross the street. He continued to stare, and never blinked!

Finally, the light changed, and I hurried across, finally on the street of my hotel. I still had about 3 blocks to walk along it to my destination. Another homeless man, this time scrawny and very dirty, then crossed my path. He walked up to a building directly behind me, placed his hand on the wall, and proceeded to vomit on it. After he finished, he wiped his mouth and continued on his way, leaving a mess that still makes me wince to picture.

Across the street from my hotel, a couple stopped me. I was seriously freaking out by then, but they only wanted to know if there “was a Starbucks around here.”

I pointed them to one about one block away and then they thanked me. As they walked off, I muttered under my breath, “I fucking hate this town.”