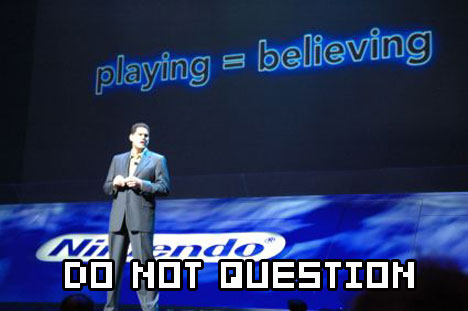 Following Nintendo’s underwhelming dog and pony show at E3, a whole slew of folks happily jumped on the Nintendo bashing bandwagon. Which really was the only appropriate response. Perhaps not bashing per se, but lambasting, rebuking, chastising, criticizing, and other words that end in “ing” and mean calling someone out for epic failure most definitely. Considering Nintendo’s been in business for over 100 years now they should know better than to expect warm fuzzies and lengthy litanies on how just how gosh-darn proud everyone is of the effort they put forth in disappointing the everliving crap out of their fans. Naturally that spawned a backlash of its own. A chorus of kinder souls calling foul on those among the gaming community that had the sheer audacity to say anything about Nintendo’s display other than “Man, Miyamoto simulates clumsy oral sex flute-playing so good!” Which, in all fairness, would actually have been kind of true.

According to anyone not utterly dismayed by Nintendo’s brief window into a mediocre, suburban nightmare, we are “haters”. Nothing more than a pack of disloyal, fair-weather fanboys that hopped on the hate bandwagon the second the blood hit the water. I’m big enough to admit that there are those among us that are exactly as I’ve described; people that criticized Nintendo for criticism’s sake alone. But that doesn’t mean that anyone expressing disappointment is traitorous, and confusing that fact is dangerous. The problem here is the brand loyalty that inspires that kind of reaction. Brand loyalty is a concept that I’ve never fully understood and has always just seemed ridiculous at best. Just because you’ve really enjoyed something a company produced previously — lauding them for their achievements and innovation throughout the years — doesn’t mean you’re obligated to like what they produce later. And it definitely doesn’t mean you’re precluded from calling them out if they go from producing “good” products to producing “bad” products. This isn’t a war being fought for higher ideals, it’s three companies making electronics that (for most of us) are supposed to provide you with an experience that’s as far removed as possible from the constant aggravation every day life. Currently, Nintendo isn’t doing that, so they aren’t getting my money and that’s that. But some people feel the need to vocalize their frustration at the failings of an organization they’ve held dear for years, and they’re well within their rights to do so. The mere request to remain tight-lipped over their disappointment in a company that used to be on top of the industry is fanboyism bordering on insanity. Granted, the same could be said for the reverse. If you’ve gotten so worked up that you boycott Nintendo over them showing up to E3 with their WiiDick in their hands and a smile instead of something amazing you’re similarly psychotic. But you’re not necessarily to blame. The whole environment of fanatical brand loyalty is encouraged by the “Big Three”. They want us to fight amongst ourselves, because it means you’ll keep buying their products regardless of the actual quality of what they’re producing. I’d say that these companies don’t care in the least about whoever’s buying their products, but that’s not totally true. They care just long enough to separate you from your money. Like a prostitute in a business suit grinning up at you with all manner of bad intentions and a piece of complicated plastic in their grip that’s about to ruin your day. And the only thing standing in the way of you and the great white sullying are the two others waiting in the wings that want to screw you just as bad as the first — they’ve just got nicer equipment. Unfortunately, the battle for highest market share in the games industry only results in one casualty, gamers as a whole. Rather than duke it out themselves, they let us do the dirty work by instilling a sense of singular loyalty when it comes to what you game on. By creating this schism within a community that came together because of a shared interest game companies have insured their continued survival with a fanbase that would put the most zealous Jihadists to shame. It’s a matter of perspective. Of realizing that by being “loyal” you’re just missing out on the fun that we Benedict Arnolds are having. In all fairness, my own perspective could be skewed by dint of a largely video game-less childhood and the undernourished sense of system allegiance that results from such a thing. Brand apathy is great! It’s incredibly freeing to realize that just because Company N sucks at what they’re renowned for usually doing well doesn’t mean that Company M’s awesome stuff is any less fun. And hey, Company N could get its act together, right? I’m not recommending we all gather ’round the camp fire for Kumbaya and hugs. I totally have the desire to kick each and every one of your asses over your favored online multiplayer network — which, of course, will never happen thanks to my chronic Stupidfingeritis. That’s part of what we’re all about as gamers. Competition is healthy and should be fostered. It inspires innovation and creativity, even if it’s just to figure out a slick way to screw over everyone else. The problem arises when we mistake allegiance for competition; when we forget that the battle for supremacy between Microsoft, Sony, and Nintendo is their battle alone. We’re just responsible for reaping the benefits of their fight, not painting ourselves with the colors of whomever we’ve decided to ally with and jumping into the fray. So let’s all take a deep breath, relax, shut the fuck up, and just play games.