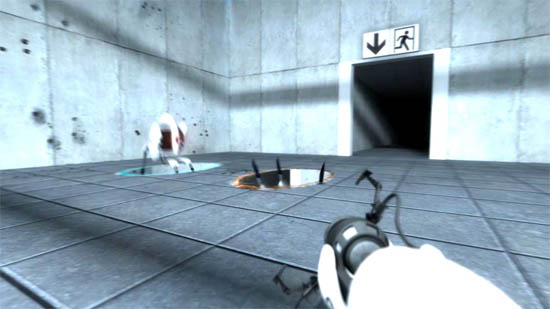 Portal is one of those games that, in my heart of hearts, I believe to be made just for me. That’s right: somewhere in the last couple of years, a magical faerie descended upon a group of Digipen students in the dead of night, sprinkled granulated hopes and dreams into their hair, and created the inspiration for what would eventually become Portal. It’s mighty unlikely, sure, but it’s early morning and I’m running on a long, long week practically devoid of sleep – I’m entitled to create entirely impossible scenarios, damn it.

Valve’s Doug Lombardi was on hand to guide me through a demo of their upcoming mind-bending puzzle-platformer, and thank God that he was; no matter how familiar with the mechanics you might be, there’s something inherently jarring about a game like Portal. Being a first person game in which a portal-slingin’ gun thang hangs ominous in your POV, you want to leap in like it’s a first-person shooter. Old habits die hard, especially when the hallmarks of the Source engine – beautifully configured to fit Portal’s sleek and stylized design sensibilities – get you thinking about gravity guns, saw blades, and using one to hurl the other at zombies. This was going to be different, and I’d need a little help.

For the first few stages of the demonstration, I was given access to one portal that I could place anywhere in the rooms – the other was already set in place, which served to give me a pretty solid hint as to where I was supposed to do. Much of the first few levels was focused on climbing – opening a portal and walking out another on a higher plane to reach my destination. Eventually I was eased into momentum puzzles – dropping into a portal from a great height, gaining speed, and firing out the other end and using the momentum from my descent to bridge great horizontal distances. The real fun kicked up when I was given access to two portals, and in and an out, so to speak. But before I get on that, a word on the controls:

As those familiar with zee Linde are already aware, I’m definitely a mouse and keyboard kind of guy, but alas, this demonstration was being offered on the PS3. While my recent romantic affair with the Xbox 360 has me a little quicker on the draw with first-person controls using analog sticks, it took me a little while to get accustomed to the controls and make those fine adjustments and slow crawls towards platform edges without killing myself in a very, very stupid way. The controls, however, worked quite well, even on a controller. The creation of portals (the availability of which was indicated by a rather intuitive target reticule) was mapped to the L2 and R2 buttons for red and blue portals, respectively. Jumping and picking up blocks were handled by the SIXAXIS face buttons. Even on a controller, this worked pretty damn well, owing in no small part to the game’s simple yet versatile control scheme.

Access to both in and out portals changes the dynamic of the gameplay completely. While oftentimes handy-dandy markers will indicate a good place to start and provide helpful hints along your way, some levels can be simply overwhelming in scope and structure, necessitating some creative thinking on the part of the player. This is the part of the game that encourages goofing off, not unlike what was seen in the game’s first trailer – jamming portals into a corner and chasing yourself through them, creating an infinite loop that you can’t escape (yay gravity), that kind of thing. When I was given my second portal, the game simply bloomed; I felt as though I was let loose on the most fantastic playground I had ever seen. The first order of business was finding a route through these deathtraps – I went to work.

What’s wholly remarkable about this game is that it really does feel like a first-person puzzler. It’s not a hybrid game, and while it does showcase a number of elements from the genres that inform it, it looks and feels like uncharted territory. Once I got the hang of things, I didn’t want to stop, which leads me to my only complaint about the game: word is it’s short, and that’s the last thing I’d wish for. There are ways around it, however – Portal is a game that absolutely begs for user-created content, a level editor and so on, to keep the party going as long as possible, and I’m sure we’ll see something like that down the line. In the mean time, however, I’m certainly hoping that this game is the start of another long-running Valve franchise, even if it’s updated and revisited as rarely as its counterparts Half-Life 2 and Team Fortress. I don’t care how long it takes – should Portal prove to be as consistently an enjoyable experience as what I was shown in the demo, I’ll only have three words for Valve: more, more, more.