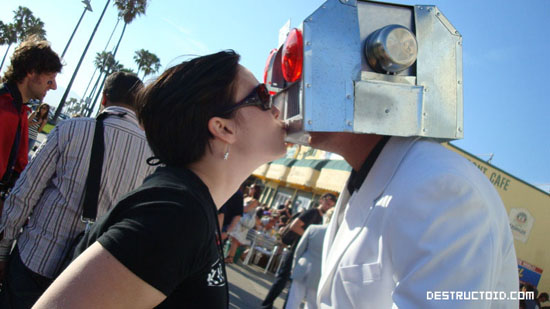 When the public masses encounter the shining silver legend that is the official Mr. Destructoid Robot, it’s not uncommon for their tiny influential brains to become overwhelmed with high levels of awesome. At times this results in vocal exclamations of “Woah there Mr. Robot!”, at others, favorable journalistic blunders ordaining Niero as the Creative Director of Nintendo. One thing however is known to be true; that the Robot has the ability to elicit all ranges of win within the little people. A mere glimpse of his helmet sets people ecstatic to see a Robot walking among us, and most likely in a much more stylish manner than themselves.

What became exceedingly clear over the course of E3 is the underlying truth that Destructoid owns all visually (and in everything else of course), successfully dominating with every step he takes in the most brilliant shades of epic. Having the role as Mr. Destructoid’s personal photographer, I share with you the many sightings of the Robot in the following gallery. I mean, who doesn’t look good next to a robot in an ice-cream white suit anyway?

[Special thanks to Chris Furniss of The Weekly Geek & Magi Tiks for some of the photos!]