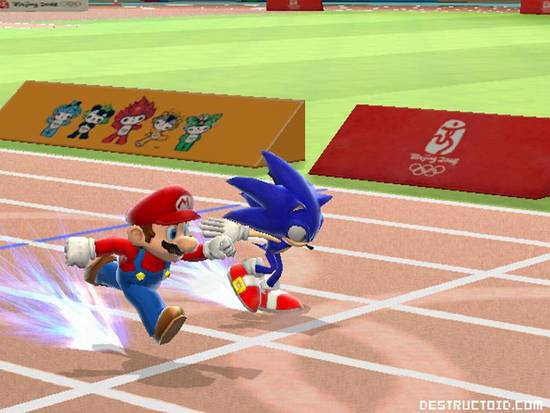 Check out Mario and Sonic … they’re at the Olympics! Isn’t that grand?

Even though Mario & Sonic at the Olympic Games for the Wii was not playable, it was demoed by Sega behind closed doors. Quite honestly, I think that’s probably enough for me. The title (almost too predictably) appears to be nothing more than a mini-game fest, filled to the brim with waggle and shake controls worthy of any game that’s going to sell ten million copies on the name alone.

Hit the jump for full impressions. 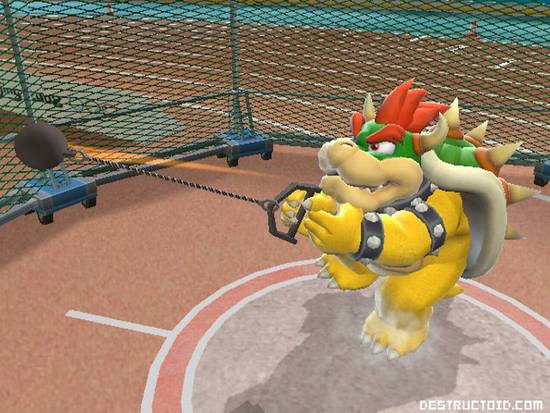 While the game will feature 20 or so official Olympic events, only two were shown — the shot put and the 100 meter dash. If appears as if Ubisoft’s Rayman Raving Rabbids might have been the inspiration for Sonic and Mario at the Olympics. The shot put involved swinging the controller around to gain speed, and pressing a button at the precise time. The dash basically involved “pumping” the controllers up and down to gain speed.

As for the questions as to how anyone is going to best Sonic in anything involving dashing,  Sega is answering that by giving each character his or her own attributes. Sonic for instance, is fast but has low acceleration. In an event like the 100m dash, this could leave him at a disadvantage unless he takes the lead early.

The game will support 1-4 players, and in addition to official Olympic events, will have unlockable events based on themes of both the Mario and Sonic universes. With simple controls, this is clearly aimed at extremely casual players and children, which should surprise no one. The simple button mashing of previous Olympic games have been replaced with high intensity, simple waggle.

But so what? This game is going to be a huge seller for Sega when it hits the Nintendo Wii, along with a DS version, this holiday.