Keeping in the tradition of market over-saturation, Capcom is releasing another Mega Man ZX title. The new ZX, in celebration of the Blue Bomber’s 20th anniversary, will be called Mega Man ZX: Advent.

Unlike a certain other Mega Man titles coming out this year, I actually had some time to play this one.

More PEW! after the jump.

As if you really need any more information on yet another Mega Man title, right? Yeah, well, this one is actually pretty good. Mega Man: Starforce may be good, too, but I wouldn’t know .

So lets start off with the obvious; there isn’t going to be too much of a difference in the game play from previous Mega Man titles. In fact, you already know how to play this game. With that being said, we can move on to other topics.

Lets discuss the graphics, shall we? I wasn’t blown away by the graphics in this title. This may be because the screen I was playing on was blown up to gargantuan proportions, but nevertheless, Advent didn’t rock my socks off.

But when was the last time a Mega Man game actually did blow me away? It’s been awhile. The last game in the franchise that I remember being stellar was the first Mega Man X for the SNES, and that is kind right around where Advent is graphically.

Now even though the graphics could be considered a little outdated, I still felt enjoyment while playing the new version of Advent (ZX Advent is actually ZX 2).  I still get a kick out the 2-D platforming action of the series and, unlike most gamers, am not completely burnt out from the franchise overkill.

During my time with the game, I played through the Backfire boss level and felt that game play was tight. The boss was a little on the easy side, but I get the feeling that Capcom isn’t making these games for people like me any more. Either that, or the boss was the first and easiest boss. 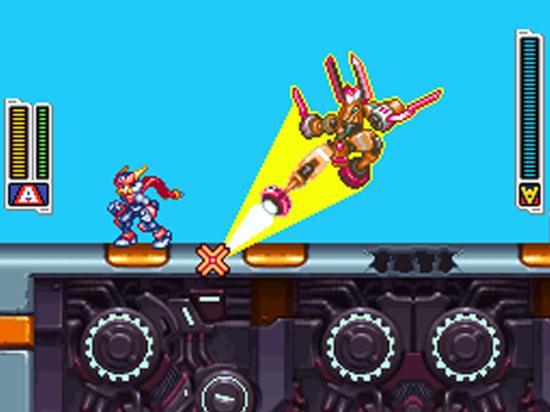 During the level, you can switch between your character’s different armor sets. See, unlike the Mega Mans that used I’m to, the ZX series has you becoming the bosses that you defeat, not just taking their powers. You are able to switch between these boss armors – or no armor at all, why? – at anytime in the level with easy use of the touch screen.

I know that this sounds like the same old thing, but different, and you would be correct in saying so, but it’s kind of more fun to switch into the giant boss robots themselves, than just changing the way your blaster fires.

Also, this robot changing is important in several areas of the game. You will come across certain areas that can only be passed by adopting a particular boss armor type. This gives the game a little bit more depth than the usual; kill boss, get power, kill next boss, get power, etc.

That aspect of the Mega Man series has been left behind in this release, the player now has a more open feeling of choice in which what boss they’re going to tackle next. Capcom tried to steer away from the game feeling like it just had one boss level after another by allowing different paths to each one (so I’m told).

To add even more depth of the game (I know, its Mega Man, what depth?! Just bear with me), the player can finish the game a second time with the other main character, thereby getting another side of the game’s story. If you’re a fan of the series, also know that you can also unlock the two protagonists from the first ZX: Vent and Aile.

I had asked if you could play as the two main characters (Grey, and Ash) at the same time — a la Castlevania: PoR — but sadly, no. You only can play as one character at a time –booo!

The game will have some Wi-fi features, such as head-to-head and co-op, but they weren’t available for me to play. Oh well. I feel that I’ve given you way more information than you could possibly want about this game, but that’s my job, folks.

So, bottom line, if you like Mega Man, you’ll like this game. From what I saw, it doesn’t deviate too much from the previous series (that’s sarcasm!), but still has some interesting features to keep you happy.