What do you get when you combine gigantic ball-rolling fun with weird (and I mean, weird) rainbow loving characters? Easy, you get yourself the overwhelming cuteness of Katamari. What happens when you take that cuteness and cross it with the Xbox 360? Beautiful Katamari, that’s what.

Hit the jump for the hands-on impression.

There are a few things in this world that give me an almost inexplicable sense of joy. Things like: kittens, sunny days, warm chocolate chip cookies, free drinks, and hookers with hearts of gold.

Whenever these things come into my life I always feel a warm, glowing happiness. Although, the happiness that these things bring, is far outstripped by the uncontrollable and completely illogical feeling of joy I get when playing a Katamari game.

For some reason — maybe it’s the cute Shrimpy Prince, or the goofy noises the people make after they’ve been rolled up –  the Katamari games elicit such a profound sense of happy in me that is so strong, my face becomes permanently affixed with a big, dumb grin.

This was pretty much the state I was in after I found out that the Namco booth had a playable demo of Beautiful Katamari for the Xbox 360.

Without hesitation, I jumped right up to play, and let me tell you; this game is everything that I hoped it would be, and more. 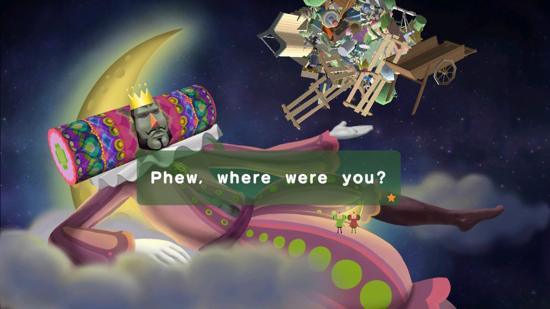 Not only are the graphics a few notches above the PS2 version, but they also aren’t overdone. Sometimes when developers take their titles to more powerful machines, they get carried away with making them too next-gen.

That’s not the case here. Beautiful Katamari is exactly that: Beautiful. The game incorporates the power of the 360, for sure, but it still retains that perfect balance of cuteness and graphics that has been the hallmark of the series.

While playing the demo, you can see that the developers decided to use an almost cel-shaded approach. I say ‘almost’ because it’s not too much, but not too little. At first glance, it appears that they didn’t even upgrade the look at all, but the difference is so subtle, that when you finally notice how the graphics have been improved; it just makes you love the game even more.

And love the game, I do. I can never get enough Katamari in my life, and knowing that Beautiful Katamari will be coming to my 360 just makes me even happier (and saves me $499!).

According to the rep, the game will have tons of online content, such as: new cousins, online co-op, online battles, and  — although she would neither confirm, nor deny this — new levels (it was strongly implied, wink, wink).

The game played well with the 360 controller. Although, since the analog sticks aren’t directly next to each other, the controls felt slightly different at first. This difference won’t keep people from enjoying the game, but it did take a second to get used to. 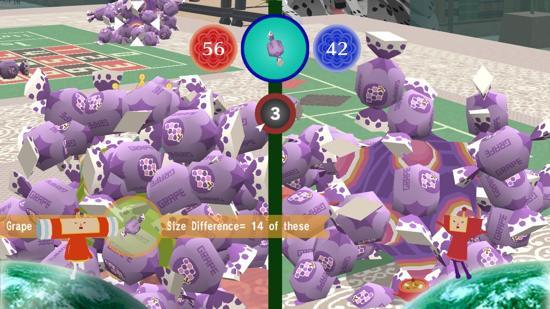 So, once I got the demo rolling (no pun intended), the Prince and I set out to please his demanding father, the King of the Cosmos. The level that they provided for the demo could be considered your basic Katamari town level; streets, houses, people, fish on hammocks.

As usual, you start off small and work your way around the city streets trying to pick up whatever you can, eventually getting bigger and bigger. My first goal was to get as large as I could ASAP, so that I could start rolling over the townsfolk with impunity. Like I said before, I love the noises they make when they realize a giant Katamari has captured them.

(I actually asked the rep if the townspeople still made those weird noises. Answer: yes!)

The demo level was a lot of fun and showed that Namco put a lot of time into using the 360’s hardware for added game play. The level probably had at least three times as many items to roll over per square inch,  than any level in W <3 Katamari. 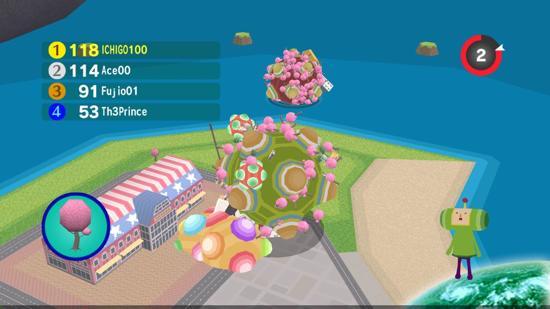 Speaking of We <3 Katamari, that game suffered from some loading issues that I felt detracted from the overall game play. Loading halfway through a level slowed down the fun of the game, along with the pressure you normally felt while the clock was ticking down.

I didn’t see any of that mid-level loading going on the Beautiful demo, but keep in mind; it’s only a demo. There may be loading in the later levels, but from what I saw, it wasn’t evident. Lets hope it stays that way.

Okay, so now that you know about my unnatural love for all things Katamari, I hope you can understand why I thought this was the one of the more memorable moments of the show. I seriously wish that I was still playing right now.