Next May, Robert Downey Jr. and Gwyneth Paltrow will star in Iron Man, a film based off of the popular Marvel comic book superhero. And what would it a big budget Hollywood action film be without an accompanying videogame?

Behind closed doors, Sega and developer Secret Level (shouldn’t these guys be working on the next-gen Golden Axe?) demoed an extremely early version of the game running on an Xbox 360. Hit the jump for my full impressions of the short demo that was cut even shorter when the unit it was being played on locked up.

I wonder if Microsoft also extended the warranty for dev kits …

A third-person action title, the early demo took place in a relatively barren, snowy mountain area. The enemies Iron Man encountered were disgustingly generic — tanks, anti-air guns, etc. However, the small variety of enemies served to show off Iron Man’s strengths and abilities, both on the ground and in the air.

At his disposal, Iron Man has weapons like hand repulsors and his chest beam, both of which are traditional parts of the comic’s lore. While the chest beam is more powerful than the repulsor rays, it will also drains more of Iron Man’s energy, indicated by a small meter on the left-hand side of the screen. Also available are guided missiles, one of the game’s various upgrades that can be acquired as the Iron Man suit evolves.

One cool example of Iron Man’s abilities involved grabbing a guide missile mid-flight and tossing it back at an enemy. Other examples include ripping off a tank’s gun turret or grabbing a hold of a jet in the air, only to throw it down to the ground at your attackers. The gameplay is action-oriented, with the goal being to keep the battlefield chaotic at all times. In Iron Man, things go boom, enemies die. Simple enough.

While the game’s story will follow closely to that of the film, Secret Level will also be elaborating on the narrative to create a deeper, longer experience. It’s extremely early, so they were mum on who or what you’d encounter. With 40 years of Iron Man history to draw from, it’s safe to say you’ll see a number of familiar faces, both friend and foe. Unlockable classic suits (in addition to the evolving outfi from the film) have also been confirmed for you comic purists. 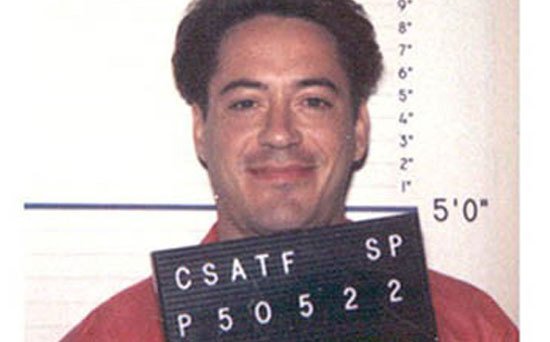 There was no filming or photography allowed while the game was being demoed, and Sega’s E3 press site was devoid of any Iron Man information whatsoever. Assets are most likely being heavily controlled by the film’s distributor, Paramount Pictures, as its May 2008 release date is quite a ways off.

So unfortunately, the image you see above you is only a mugshot of Robert Downey Jr., and not an actual in-game image; I’m sorry if I got your hopes up. The image used above that is a shot of Iron Man from the upcoming film, which is a good representation of what he looked like in the demo. From both an audio and a visual standpoint, Secret Level is attempting to adhere as closely to the film as possible. Whether or not Downey Jr. and Paltrow will be providing the voices remains to be revealed — contracts and such are tricky things.

This next-gen Iron Man will be available for the Xbox 360 and PlayStation 3. The game will also see life on the Nintendo Wii, PlayStation 2, Nintendo DS, Sony PSP, and PC.