If you’ve ever listened to my podcast, you’ll know that Zelda: Twilight Princess left me thoroughly unpleased. I’m certainly not going to bring that argument up again here, but know that I’m no longer looking forward to the next Wii installment.

Thankfully, I can still get my Hyrulian adventure fix with the uber cute, Wind Waker sequel on the DS.

Is it fun? Read more.

I won’t go into detail about the graphics (cel-shaded FTW!), because I’m pretty sure you’ve already seen plenty of screenshots. Although, I will tell you that the game looks wonderful in motion, and that the pixie-like cuteness of Wind Waker has been brought back in full force.

But, now back to business. So far, all I’ve seen from Hourglass has been a couple of game play videos, and honestly, what I saw didn’t make me too confident in the games touch screen only control scheme, but when I actually got my hands on it  — I was impressed.

Using the DS stylus to control link’s action works far better than I expected. Before, I was worried that the game would feel like you were “dragging” link around, but that’s not the case. All you have to do is just touch a portion of the screen and link will run right there.

Interacting with the environment is even easier. I was worried that there would be some sort of arcane and intricate stylus input required in using your sword or lifting items. Nope, all you have to do is tap. For example, tap on a barrel and link will run over and pick it up. One more tap of the screen, and link throws it. Enemies, signs, and people are also the same. Just tap on a person and link will run right over and start talking to them.

This ease of use was a real load off my mind, it’s hard to see a franchise you like get messed up by poor controls, and you never know what kind of result you’ll get when touch screen controls are added.

Strangely, the thing I had the most fun with the map feature of the game. If you haven’t seen it before, the map in Hourglass is viewed on touch screen and allows you to use the stylus to make notations. Originally, my preconception of this feature would be that the little marks you could make would be rather limited. But, as it turns out, you can write anything you want all over the map screen, anything at all.

So of course, Chad and I proceeded to write, “Also, cocks” on every single DS they had that was playing Hourglass, and left them for the next set of reviewers to find. 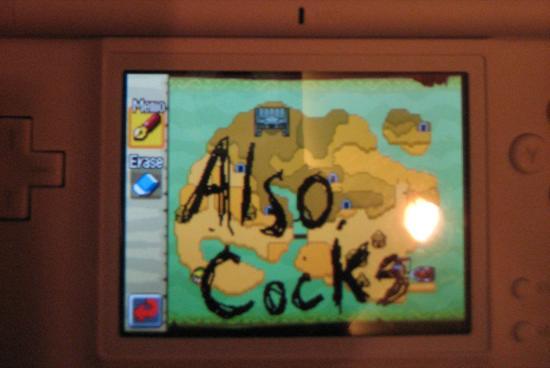 Filed under... #DS#E3#The Legend of Zelda