On a somewhat related subject, this past week I was in a meeting with some representatives from LucasArts and they were showing me some pretty impressive gameplay footage from upcoming titles Star Wars: The Force Unleashed and Fracture. I thought the stuff looked great, and I told them this, but I kept trying to get one piece of information out of them that I kind of wanted to know more than anything: Will LucasArts ever release a new game in the series?

Unfortunately, the kind gentlemen from LucasArts just kept smiling and, without another word, would continue showing me footage from the aforementioned games. Yeah, I figured was off the subject, but I love those games so much and wanted to see if I could get some sort of inside scoop on a possible new chapter in the classic series.

Well, I never thought I would say this, but just the next morning after my meeting I may have found my temporary adventure game pirate replacement for Guybrush Threepwood, and his name is Zack.

The easy winner of the prestigious “E3: Um, What the Heck, That Game Was Amazing! Award” has got to go to Capcom’s brilliant Zack & Wiki: Quest for Barbaros’ Treasure for the Nintendo Wii.

If you were even the slightest fan of older point-and-click adventure games and have been waiting for a Wii title that really showcases the system and its unique control, look no further than after the jump.

I had heard some interesting things about Zack & Wiki: Quest for Barbaros’ Treasure a while back (when it was tentatively called Treasure Island Z) and have always loved the Wind Waker-esque visual style, but once Capcom announced the not-so-great updated name my interest started to wane.

Obviously, I was still interested in what the game had to offer, as I picked it up while on the show floor at E3, but I really wasn’t expecting much.

Well, stop the presses, because I had a ridiculously good time with Zack & Wiki! Seriously, almost Game of the Show good. Who would have thought?

First off (and all you Wind Waker haters might want to skip this part), the game is gorgeous. There have been many cell-shaded games that have come out since Link’s GameCube adventure, but none have ever looked as polished or sharp. I am happy to admit, then, that the graphics in Zack & Wiki really remind you of how great cell-shaded games can look when done right.

And to avoid just labeling it with simple Wind Waker comparisons, it must be said that Zack & Wiki really has a style that is all its own. 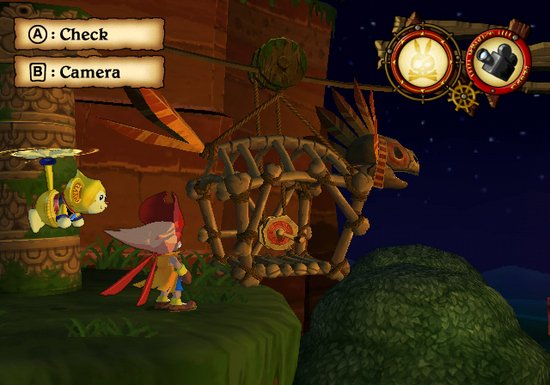 There was a surprisingly big chunk of the game playable at E3 and I tried my best to experience as much of it as I could. I was having so much fun that I really didn’t want to put the game down.

From what I saw, this is what I could piece together about the story: The main character Zack and his weird flying monkey friend Wiki are part of a group of sky pirates that call themselves the Sky Rabbits (who are looking for a mystical treasure). As the game begins, you are flying around in your pirate seaplane (of course!) when it is attacked by a rival sky pirate gang, Rose Rock, led by the mysterious purple lipstick-wearing Captain Rose.

Once your ship is attacked during the opening cut-scene, the game immediately begins.

To be honest, I was not really sure what kind of game Zack & Wiki was before E3. I knew it had something to do with puzzle-solving, but then I thought it may be a platformer, but then it looked like an adventure game, but I also saw some first-person stuff in there … well, needless to say, I was a little confused before I finally got to play it.

The best way to describe the game is to compare it older point-and-click adventures on the PC. Kind of like Monkey Island or King’s Quest, you move your character anywhere on the screen just by clicking your on-screen cursor (in this game, a star) in that area. Same with on-screen actions: if there is something you can interact with, your cursor turns pink and you just click away with the “A” button. Simple as that.

Zack & Wiki is composed of a large amount of “levels,” each one more mind-boggling than the next. Each level is more or less in one giant room. And while that sounds limiting, it really isn’t once you realize how big and complicated the rooms can get. Even cooler, each room sports a “hollowed out” or “cut in half” look to it. For example, when you are in the plane at the beginning or a cave later in the game, both things are basically chopped down the middle so the player can see the action inside. It sounds like an obvious choice, but it is a clever way to reveal a lot of the level’s secrets (like holes under the ground, etc.) and really adds to the cool visual style.

So, anyway, as I was saying before, once your plane is attacked the game begins. This first level is great because it is small and really helps you learn the basics of how the game is played. By moving around your cursor, you realize there are a few things you can click on: you could talk to the pilot (“Stop talking to me, we’re crashing!), knock over some cargo boxes, or (aha!) click on a lever in the back of the plane. 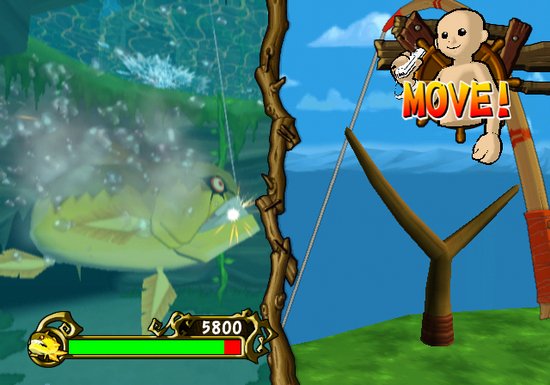 When performing some actions, the game really shows you how innovative and creative it can be. Depending on the circumstance, sometimes you will click on an action and the camera will change to first-person. When this happens you have to mimic the “real-life” action on-screen by using your Wiimote. When clicking on the plane’s lever, for example, you have to hold the Wiimote exactly like the lever and pull down, just like you would if you were there.

Upon doing this, the back hatch of the plane opens, and you and Wiki escape just seconds before the plane explodes.

But the level doesn’t end there; it actually continues as you are quickly falling towards the ground below. During this clever sequence you are introduced to more important play mechanics that you will encounter many times in the game. 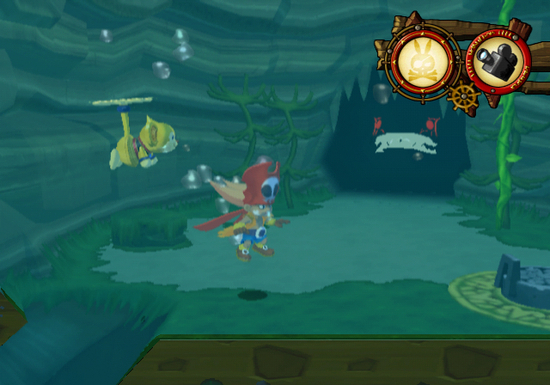 At any point while playing, you can hold down the “B” trigger and move the camera around to get a wider view of the action. Comparatively, you can also click the “Camera” icon on-screen and the view will jump far back to give you an almost bird’s eye view of all the action. These two features are really important, especially in the falling sequence, because it allows you to see an item (an umbrella) that is packed in the cargo of the plane that was just out of view.

Once you grab the umbrella (by easily clicking on it), you are introduced to using items. You can only carry one item at a time, but you also have the option of dropping that item and picking it back up whenever you please. By clicking the “Item” icon on the screen, you can use whatever item you are carrying.

But it is not just that simple. For example, when you are plummeting to the Earth and want to use the umbrella to save yourself, you click on it and the item zooms in on the screen. Now, you are instructed to open the umbrella, but the game gives you no hints how to do it. Of course you can manipulate the umbrella (like you did the lever) with the Wiimote, but that won’t always be the answer. I thrust it forward, hoping that it would pop open, and even tried flicking the Wiimote as hard as I could, but nothing happened.

Finally, I noticed that if you turn the umbrella a little bit by rotating the Wiimote a “2” icon is engraved on the handle. Then I finally figured it out. I quickly pushed the “2” button on the Wiimote and the umbrella popped open, functioning in the same way as a real umbrella would, by opening once the pushed the button.

In a nutshell, this is how the entire game works. You move from one area to the next and have to use your brain (and all the items you can find) to complete whatever challenge is given to you. Even though all the levels were not present in the build I got to try out, I was amazed by how much there was to do.

One section had me stranded on a rock jetting out from the middle of a waterfall. As the level starts, your plane (which had crashed earlier) floats down the river, about to cascade over the waterfall and destroy the rock you and Wiki are standing on. A smaller screen then pops up in the corner, showing you the plane as it moves closer and closer to the edge of the waterfall.

This is so cool because it adds a lot of tension to the level, as you only have a limited amount of time to complete it before you are killed. And, yes, that’s right, you can die in this game. Unlike most adventure games, you actually can die very often in Zack & Wiki if you make the wrong decision, forcing you to retry the level again from the beginning.

This is not a huge deal if you are on a small level, but later in the game, when the levels get huge, you have to be a lot more careful. Luckily, there are hidden talismans you can find (or purchase) that will give you another shot, just in case bad luck strikes. 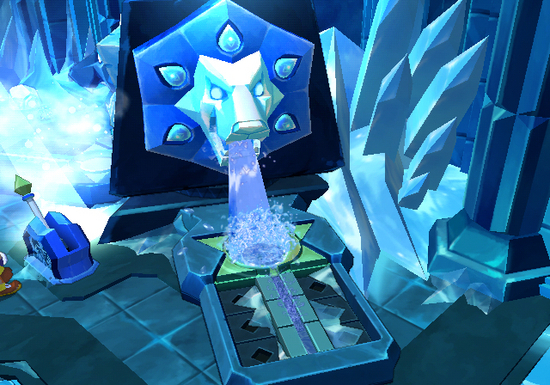 I have already gone on way too long already, but I could write all day about some of the ridiculously clever puzzles and environments I got to encounter when playing Zack & Wiki. From gigantic, Mouse Trap-like machines to precariously hanging trolleys to zombie ghosts; the game really has it all.

And I was also blown away by the challenge. Honestly, there really aren’t any hints throughout the entire game, instead just allowing the player to experiment with everything to figure out what to do. Fortunately, everything makes sense in the context of the game, unlike something like Hotel Dusk that will throw a puzzle at you that is almost impossible to complete without a guide.

Zack & Wiki: Quest for Barbaros’ Treasure was a pleasant to surprise, to say the least. It really is the perfect showcase for the Wii (there is almost no way this would be nearly as enjoyable on any other system), and I am still very surprised that I haven’t heard more about it. To me, this kind of game could sell more Wiis than ever since it such an original, intuitive breath of fresh air.

If you are looking for something fun, creative, challenging, and wholly different than anything else out there, I cannot recommend Zack & Wiki: Quest for Barbaros’ Treasure enough. I am almost looking forward to this game more than any other all year.