Going into E3, one of the games I was most excited about getting some hands-on time with was Ratchet & Clank Future: Tools of Destruction, the first “next-gen” game in the awesome series, exclusive for the PlayStation 3.

I am a huge fan of all the Ratchet & Clank games (yes, even Deadlocked), so I knew there was a very slim chance that I would walk away from this new iteration disappointed. And even if I was a little letdown, it’s not like I would have done something drastic and unsurprisingly overdramatic like throw myself off the Santa Monica pier shouting “Why, God, why?” as I plummeted to my aquatic doom, right?

Well, as you can see, I am still alive and kicking, so it is safe to assume that my expectations were comfortably met.

But how great is Tools of Destruction? Is it good enough to warrant a $600 $500 $600 (Sony, you confuse me!) purchase for those of you out there, like me, that are still waiting for that one great game to come along before buying a PS3?

Hit the jump to find out why I just started counting my pennies.

Ratchet & Clank Future: Tools of Destruction doesn’t stray very (read: at all) far from past games in the series. In fact, some people may judge it immediately as almost too familiar to previous outings and brush it off as possessing no real innovation.

Well, usually I would agree with them, but with Ratchet & Clank Future: Tools of Destruction everything just feels so right. I am guessing this mostly has to do with the fact that all the good stuff from the older games was pieced together to form one beautiful package.

And, seriously, the game is beautiful (in my opinion, the best thing I have seen on the PS3 yet). 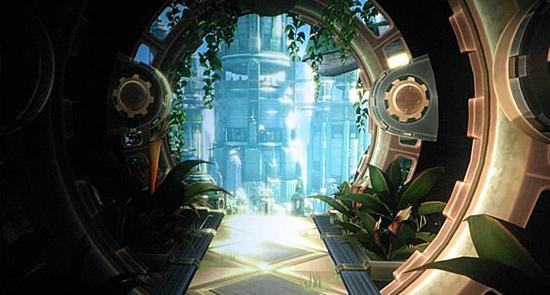 The first few Ratchet & Clank games were almost ahead of their times in what they wanted to display visually. Each and every level was a sprawling planet, some containing giant, futuristic cities filled with hovering cars and towering buildings. While the games looked great, usually the hardware limitations of the PlayStation 2 prevented the landscapes from looking as detailed as I know the developers must have wanted.

These limitations are non-issues in Ratchet & Clank Future: Tools of Destruction. In the one level available to play, the enormous city I was running through went on forever. The detail in everything was astounding, really bringing the world to life in a whole new way.

Even little things, like the lombax fur on Ratchet or the shine and reflection on Clank was superbly realized. I probably could have spent the day just staring at everything on-screen, it really looked that good.

Once I was done admiring the visuals, though, I got right into the gameplay. Like I mentioned earlier, nothing is necessary revolutionary about the experience, but almost everything felt solidly evolutionary. And for a game series, that is usually all I am looking for: a sequel that takes a significant step forward, not any kind of step back (I am looking at you, Mario Party 8).

With the same familiarity of riding a bike, you can swing your wrench with the “square” button and jump with the “X” button. Hit the “X” button again in mid-air to perform a double-jump or hold it down to eject Clank’s propeller to glide for a limited time (that’s right, the best robot ever is back in good form after a Deadlocked sideline – yay!).

And, of course, what would any Ratchet & Clank game be without all the amazing, infinitely creative secondary weapons? Only four were selectable in the demo, but if they are any indication of what the final selection will be like, you can rest assured the weapons in this game will be the best in the series:

Another thing I noticed fairly quickly in Tools of Destruction was the detailed design of the enemies.

Right when the demo starts you are attacked by a group of pretty big, hulking robot creatures that are remarkably animated (with pretty slick lighting effects and shadows). As they got closer, I realized that the real enemies were just little fish-slug things that were actually riding around inside helmets connected to the big robot bodies. The detail is so extreme that you can actually see the fish-slugs bouncing around as the robot moves.

Even cooler, once you destroy the robot body, the helmet breaks and the fish-slug creature falls to the ground. And just for cruel and unusual punishment, you can even take out the helpless little alien for a few extra bolts.

As you play through the level, most of the Ratchet & Clank staples are encountered: upgrading your weapons, collecting bolts, jumping extra high on jump pads, rail grinding (!). But instead of feeling rehashed, all of this stuff feels fresh again thanks to the extra polish and overall tightening of the entire experience.

Take rail grinding, for instance. This has always been my favorite thing about all the Ratchet & Clank games (the ability to basically use special boots to ride, almost like a rollercoaster, across a series of thin rails to get from one part of the level to another), but here, it is taken to the next level.

Using the technology of the PlayStation 3, these rail grinding sequences were visually impressive, to say the very least. Not only was the challenge of dodging gaps on the path, lasers from enemy ships, and incoming trolley cars still there, but the added panache of dynamic camera angles and interactive background events helped make the sequences, in a word, breathtaking.

One rail grinding section has you dodging enemy lasers coming from a huge flying ship in the background. As you are dancing around the ships’ fire, the rail you are riding on starts to wind its way up around a giant building. The monstrous flying machine, which is still attacking you, ends up shooting a piece of the building by accident. Now, as the ship is still shooting away, the entire building also begins to crash to the ground, pieces of falling debris breaking apart the actual rail you are grinding on.

You really have to see all this in action to fully appreciate the spectacle, but the whole thing looks and feels like one giant, over-the-top action scene from a movie. Once you realize you are in control of everything that is happening, there is no real other way to describe the experience except to say that it is surreally epic, almost like nothing you normally see in a videogame.

After the demo presented all the wacky mayhem we have come to expect and love from the Ratchet & Clank games, one final sequence showed off a taste of how SIXAXIS tilt control will be incorporated into the game. In Up Your Arsenal, fans were introduced to skydiving sequences that had Ratchet diving in on a battle field from an elevated ship, dodging enemies and obstacles as he plummeted to the ground below. Here, the same kind of mechanic is used, but instead of controlling with the analog stick, you just have to tilt the SIXAXIS in the direction you want Ratchet to go and he leans with you.

I was the first to lambaste Sony when they included tilt sensitivity in the SIXAXIS, but, here, it works perfectly and doesn’t feel gimmicky at all.

Overall, there was such a high level of polish and an enormous blast of energy imbued into each section of Ratchet & Clank Future: Tools of Destruction that I have no doubt will be duplicated throughout the rest of the game. Honestly, the other games in the series are too good to not think that will be the case this time around (especially given the fact that this game is revisting its straight-up, classic platforming roots once again).

Unfortunately, after playing one amazing sequence after the next the demo eventually came to an end and I was easily left wanting more. I can only imagine what kind of amazing planets I will get to visit and devastatingly clever weapons I will be able to handle come November 7 when Ratchet and Clank Future: Tools of Destruction is released. I am excited already.

Now, back to counting those pennies …