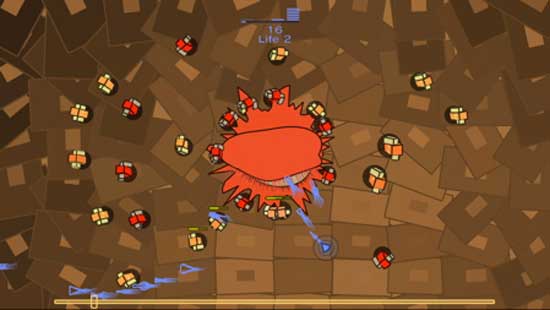 If there were ever an unlikely “Game of the Show” for E3 2007 (for me), it’s the PlayStation Network title, Everyday Shooter. The baby of designer/artist/programmer Jonathan Mak, and the winner of the Independent Games Festival, Everyday Shooter is a brilliant, soothing homage to Tetsuya Mizuguchi games like Every Extend Extra, as well as arcade classics like Robotron, and other twin-stick shooters.

The gameplay itself is simple — you move your “ship” with the left analog stick, and fire with the right. In that way, Everyday Shooter is not unlike Bizarre Creation’s popular Geometry Wars, which it shares much in common with. However, the game’s aesthetic and amazing use of sound make it a standout among E3’s big-budget, high-octane titles.

As a “synaesthesia” title, Everyday Shooter makes excessive use of sound to drive the experience. A wide variety of music (from soothing ambient techno to mild rock) draw you into the game, as sounds and music react in time with your actions. The overall experience is mind-numbing, trippy, relaxing, and addicting all at once.

What’s really great about this game is how representative it is of Sony’s dedication to actually finding unique talent, titles, and experiences, and delivering them to players. It’s always been one of their strengths, and it was something that was very evident at this year’s E3 with a lot of the announced PlayStation Network titles.

‘s N’Gai Croal has a really nice write-up on the title, one that I think is going to turn a lot of heads, particularly gamers who enjoy the experiences delivered by designers like Mizuguchi. Check out N’Gai’s post over at the Level Up blog for more detailed impressions and information, and keep your eye on Jonathan Mak and Everyday Shooter, one of my favorite games of E3 2007.