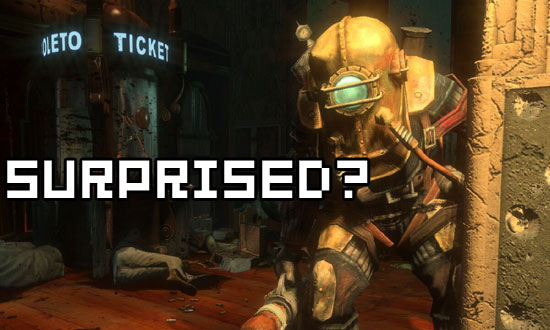 As I sit here in the limbo that is known as Denver International Airport, waiting for a plane that will shuttle me off to E3, I’m finding it hard to keep up with all of the stuff that is flooding my inbox today. Among the flurry of press releases and nude pictures of adoring female fans, 2K Games and 2K Sports have revealed their line-up for E3 2007.

The list of games being shown offers little to no surprises, which seems to be the theme so far with many companies at this year’s event. BioShock, Sid Meier’s Civilization Revolution, and for some reason, the already released The Darkness, will be shown on behalf of 2K Games. The 2K Sports offering includes two titles, NHL 2k8, and All-Pro Football 2K8.

And that’s about it.

I’ll be attending the Take-Two Interactive conference this Thursday, at the ungodly hour of 8 o’clock in the morning, so expect plenty of hands-on impressions … and with any luck, something surprising. Cross your fingers.

Highly-anticipated titles such as BioShock, Sid Meier’s Civilization® Revolution™ and NHL® 2K8 will be on display at Hotel Casa Del Mar

BioShock is the “genetically enhanced” first person shooter that lets players do things never before possible in the genre – turn everything into a weapon, biologically modify your body with plasmids, hack devices and systems, upgrade weapons and craft new ammo variants, and experiment with different battle techniques.

Gamers enter the game as a cast-away in Rapture, an underwater Utopia torn apart by civil war. Caught between powerful forces and hunted down by genetically modified “splicers” and deadly security systems, players have to come to grips with a deadly, mysterious world filled with powerful technology and fascinating characters. No encounter ever plays out the same and no two gamers will play BioShock the same way.

BioShock will also be featured at Microsoft’s Xbox 360 and Games for Windows booths at the Loews Hotel.

Platforms: Xbox 360™ video game and entertainment system from Microsoft and Games for Windows®

Sid Meier’s Civilization Revolution will be the first offering in the legendary Civilization® series to appear on next generation consoles and handheld systems. In development by legendary designer Sid Meier and Firaxis Games™, this game will deliver Civilization’s renowned epic single-player campaigns featuring vast re-playability and unmatched addictive gameplay. In addition, with revolutionary features like real-time interaction with leaders and advisors, extensive multiplayer capabilities and integrated video and voice chat, Sid Meier’s Civilization Revolution will completely transport the Civilization series to a level of gameplay that fans have never seen before.

Based on the Top Cow comic book written by Paul Jenkins and co-created by Marc Silvestri, The Darkness video game is a gritty, first-person, action-adventure game with a horror twist. On his 21st birthday, the awesome and terrible powers of the Darkness awaken within Jackie Estacado, a mafia hitman for the Franchetti crime family. Jackie is able to wreak terrifying havoc on his enemies, through the use of his new powers and Darklings – impish demonites ready to commit unspeakable acts.

The Darkness will be displayed in the Barker Hangar.

Featuring hundreds of legendary players combined with an innovative attribute system showcasing the well-known, signature abilities of each football star, All-Pro Football 2K8 delivers a one-of-a-kind next generation football experience.  Football fans will instantly identify their favorite legendary football players not just from their appearance but also by their trademark playing styles.  With these football greats, All-Pro Football 2K8 celebrates the football tradition and creates a brand new next generation football experience.

All-Pro Football 2K8 will be displayed in the Barker Hangar.

NHL 2K8 reigns supreme as the category leader in innovation, design and critical acclaim with five straight years as the top-rated NHL video game. In addition to intensely realistic gameplay, all new player models and spectacular graphics, NHL 2K8 will feature an unprecedented level of player customization with accurate body styles for each marquee player, providing the most authentic representation of your favorite NHL stars.