By this point, it seems pretty clear that Sega’s Yakuza series game releases are mainly for Yakuza fans. It’s not like they’re out to try to draw in new audiences, or if they are, they’re not trying very hard. The core concepts and gameplay have been the same since the beginning.

A Japan-based, Japanese underworld crime world sandbox game has always been the goal, and I don’t think that Yakuza fans mind that at all.

While it wouldn’t be fair to simply call Yakuza 4 more of the same, those same core concepts are here in the series’ second PS3 game. It is more of what you like, but now the story, characters, and even the off-time entertainment have been scaled up a bit. The scope is bigger, and the presentation is a bit more grand.

But it’s still Yakuza, and we’re totally fine with that.

While our preview consisted mostly of Japanese text, we did get to chat with a member of Sega’s localization team a bit on what to expect when its all said and done. Sega wants us to know that they’re working to make the most complete, unfiltered Yakuza yet for western audiences. Yakuza 4 will include the hostess clubs in full.

In fact, every aspect of the Japanese game will make it over save for the trivia show game, as it focuses on Japanese pop culture, and would be too obscure to work in the western release. 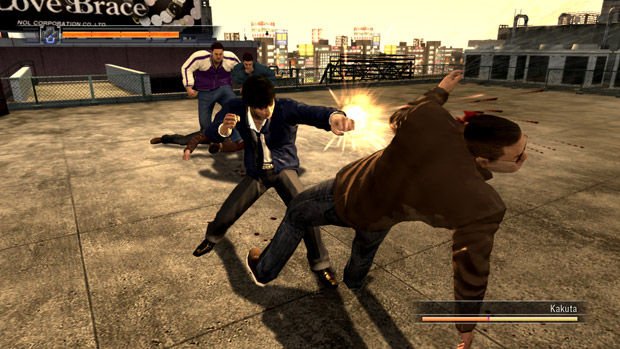 I played as Akiyama, a loan shark, for a bit. After finding a fight I quickly saw how he was different. Compared with Kazuma, Akiyama is fast, has lots of kicks, and is more combo-based in nature.

I also got a look at the Fantasy Mode in action. Kazuma soaked in a hot spring while picturing a girl in a thought cloud over his head. Progressing this visual involved sensually slow button presses, which were hilarious to do in public, with other game writers watching on.

Yakuza series fans already know that we’re in for a treat with this E3 announcement o the localization of the 4th game. For fans, it’s really just a matter of waiting. But now we can take comfort in knowing that Sega is working to make Yakuza 4 the most complete localization yet.

That’s all fans have ever wanted, anyway.