Tron Evolution is unique in that it tells the story that lies between the 1982 film, Tron, and the upcoming 2010 film. Game director Darren Hedges tells us that he worked so close with the film makers that revealing anything plot related in the game could ruin the movie for you. It’s so tied up in the films that the new movie will start exactly where this game leaves off.

The folks at Propaganda call the gameplay in Tron Evolution an “evolution” in player movement. The player movement combines arts like capoeira and parkour, and then layers disc-based combat on top of that. It sounds crazy, but it works, from what I’ve played.

The other half of the game gets you off your feet and onto a light cycle, which looks so stunning that I couldn’t really pick out a difference between the movie trailer shots and the game. All in all, Tron Evolution impresses, and I’m not even that much of a Tron fan. 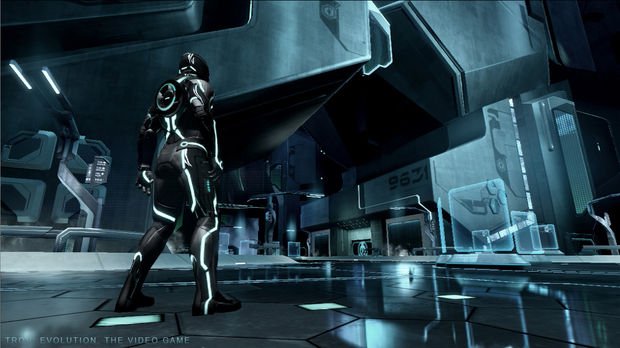 The combat segment of the game will remind you of certain games that have you scaling walls and hanging from ledges, and maybe another that has you running on rooftops. Yes, take those two games you’re imagining and then put them in a dark, neon-lit setting and throw in the Tron disc for combat, and you’ll be right on track.

Propaganda calls it high-mobility combat, and it definitely seems like it. With little to no effort, I was able to go nearly everywhere in the cityscape that I explored. The game slowly introduced some parkour-based platforming, dropping in things like wall running and vaulting to distant platforms as I progressed.

It wasn’t too long until I was dropped into combat. Most of the fighting involves doing some kind of fancy, acrobatic jump or flip to run circles around enemies and hit them with your disc with melee attacks. This made for brawls that looked really fantastic, but were actually not much more than stringed button presses.

Different discs are at the ready, and freely switchable, letting you string moves together freely. There didn’t seem to be a ton of depth to the combat, but it was certainly fun, and in some locked-down rooms, quite challenging. 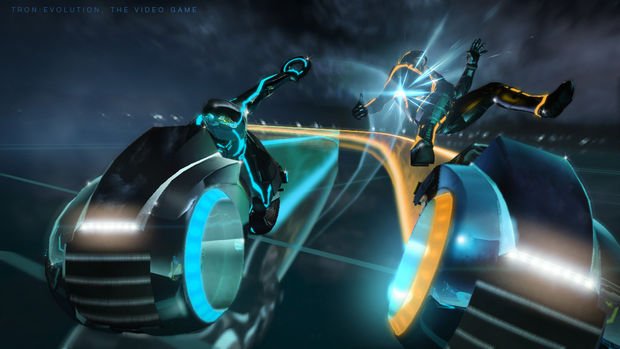 As fun as the combat was, I enjoyed the light cycle racing segments quite a bit more. Having watched other game writers try the cycle parts of the game, I was concerned that there was a balance issue with the control, as I saw more collisions (into walls and other bikes’ light trails) than progress. Thankfully it was the classic racing game issue where people fail to use their brake control.

The control made a lot more sense when I found out that I was speaking with Propaganda’s Chris Whiteside, who previously worked on several racers, including Colin Mcrae Rally, Pro Race Driver, Toca Touring Cars, Pursuit Force and more. Knowing this, I smartly applied brake at the right times and had no problems at all.

The light cycle areas are quite lovely in high-definition, and when you get going at high speed, with all the very cinematic explosions going on in the background, the game ends up looking so much like the movie trailers that it’s almost unbelievable. There’s tons of crazy shit blowing up all around you, with massive timed setpieces rolling your direction, forcing you to make well-timed jumps across broken bridges and crumbled ground. For as great as the cycle parts looked and controlled, I was surprised to hear that they’re only at about 60 percent complete!

Again, I’m not the biggest Tron fan. I’ll admit that the trailers for the new movie look exciting, and I’ll probably see it anyway. But as far as this game goes, my hands-on was enough to tell me that the game is also going to be one you’ll want to check out. It’s good to see that someone out there is working to make a really solid movie game.