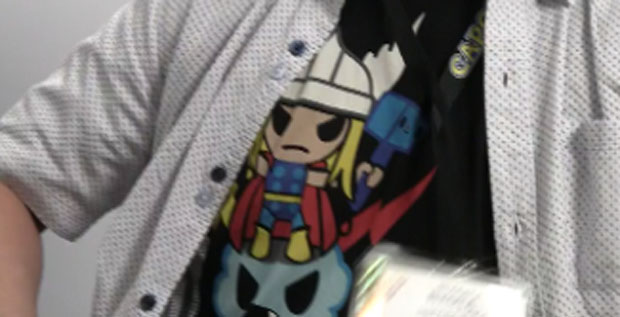 Just finished interviewing the Niitsuma-san, the producer of Marvel Vs. Capcom 3. He was wearing that chibi-Thor shirt; the one he’s been seen wearing off-and-on since the game was first announced. For the record, this is old-school 60’s Thor, not 80’s-90’s beard Thor or current-day metal-arms Thor. This is classic Thor, cute-as-f*ck, using a cloud to electrocute a man.

I got to ask him directly what this meant, and he responded by saying “I don’t know, it’s a mystery”. Then he let out a devilish cackle that would make make even the most nefarious Bond villain feel intimidated.

So yeah, uber-quick post here; I’m thinking that either Capcom is making a Thor game where baby-Thor murders other babies with the power of lightening, or Thor’s a lock of Marvel Vs. Capcom 3.

Expect the full interview to be posted as soon as I grow three more arms and another brain. So busy!

Filed under... #Capcom#E3#Marvel vs Capcom