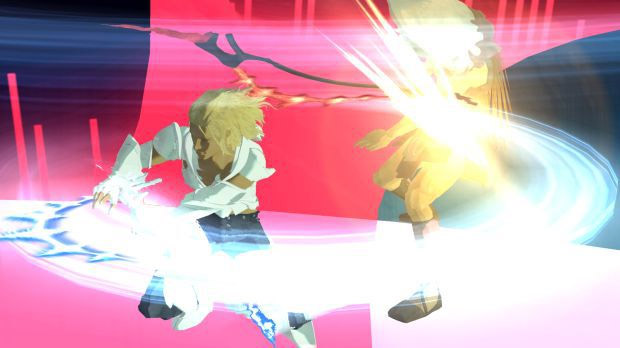 El Shaddai: Ascension of the Metatron is far from the religious games of old, nor does it have anything to do with the Amy Grant song of the same name. And I should know, as growing up in a religious household, I was more than familiar with fantastic titles like Bible Adventures. It is based upon the story of Enoch, a book that is rarely considered a part of the Biblical Canon, but is still important to Biblical theology. A tale of a young holy man, Enoch is ascribed by the grandfather of Noah, and the book describes the fall of holy angels.

However, when we say that El Shaddai is a loose interpretation of the Book of Enoch, we definitely mean loose. After all, the Director and Character Designer is Sawaki Takeyasu and the Producer is Masato Kimura, and between them and their 100-person team they’ve worked on titles like Devil May Cry, Okami, and Viewtiful Joe. That is one hell of a pedigree.

Even odder was the formation of the game. According to Takeyasu, what happened was that an Ignition UK employee brought over the story idea to Takeyasu, and he thought it was a good one, so boom. Three years later, we have a title, that if anything, is visually incredible. Stylized painterly, the game will shift between tones of neon and pastels. Enoch himself will journey through a typical hack and slash gameplay, as Takeyasu wants to make this “even better than God of War 3 or Dante’s Inferno.” Mixing things up is some sidescrolling platforming, and I’ve been told that there will be more than 10 levels going on. Unfortunately, there will be no multiplayer.

Also, I was shown two trailers of El Shaddai, one of which you can see above. From what you can see, the game is gorgeous, with a strong painterly look as Enoch, granted heavenly armor, fights through enemies to destroy the seven Watchers, fallen angels in opposition to God. He must succeed, otherwise God will destroy the world in a flood to cleanse the planet.

Assisting Enoch is the charismatic and dashing Lucifel, who guides Enoch to the heavenly weapon of the Arch, a sort of blade/bow used for attacks. Archangels Micheal, Uriel, Raphael, and Gabriel will also offer support, images of apples evoking the garden of Eden show up, and a female figure showed up that is apparently a Biblical woman. My impressions? El Shaddai looks like an impressive title that offers an insanely interesting take on an interesting and unique topic. If the gameplay lives up to the promises, this should be fun.