It’s old-school Sonic, but with a resolution bump. What do you want from me?

I’m kidding. Sega put a bit more work into it than that. Honestly, walking up to my demo station with the game running was pretty exciting. It may sound cheesy, but seeing Sonic 4 in action instantly brought me back to cracking into my Christmas Day Sega Genesis and playing through the first game with my brother in one sitting. I remember the feeling of finally acquiring each of the sequels later, and then playing through them so enthusiastically that I would find myself mocking “Nintendo kids” for no reason.

Just from looks alone, Sonic 4 brings back that old Sega pride. But how does it play?

Read on for our preview of Sonic 4.

As you might have heard, Sonic 4 is a true numbered sequel to the original Sega Genesis games, and Sega has spared no expense to make it as true to the original trilogy as possible. They told us how they’ve gone back multiple times to touch up what they originally thought was great. Even small things like recovery animations and speed up times have been adjusted to make this game as true to the old days as possible.

This works out to a Sonic game that feels just like the old ones. Watching the game before playing had me concerned that it wouldn’t, but when I finally got my hands on it, it felt good. It felt familiar. While Sonic’s jumping spin animation looks slow, its functionality isn’t. His left-to-right movement seems to move exactly where I point him, and landing on targets, bumpers, and over spikes is just as intuitive as it used to be on my trusty Genesis pad. 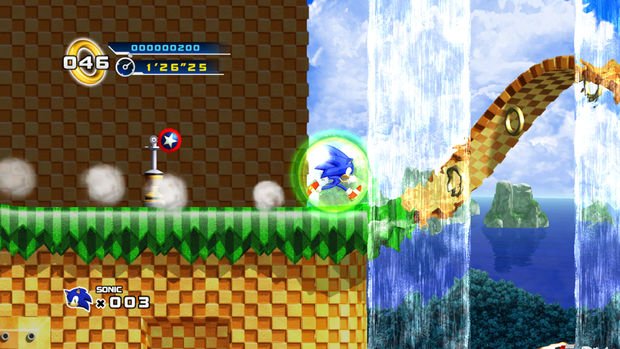 I played through four levels that looked a lot like Sonic the Hedgehog‘s first level, Green Hill Zone. I actually made my way through a couple of the levels twice, opting to take a different pathway the second time around. The level design is classic, and has that feeling that makes you want to explore them a couple of times, and then work through them to find the fastest way through later. The loops and tracks are just as fun as they always were. I found that I had a constant, underlying fear that the game would jump into 3D control at any time, but thankfully it never did.

Sega doesn’t try to pull a fast one on us by throwing in something new and unnecessary, but there is one addition that proves to be useful. A new jumping attack has you stringing bounces on top of enemies that are automatically targeted with a marker. It’s pretty fun to zip across the heads of various enemies and objects with this. In some areas you’ll need this fast auto-switching attack to make your way across ravines and over obstacles. Know that this is a subtle addition and not some bold new gameplay concept. It really does fit nicely in with Sonic’s classic move set.

I finally made my way through all the stages and into a classic Eggman boss battle. The dodge-and-jump concept is back, but there was really nothing new here. I did nitpick to Sega that you couldn’t get in some fun extra hits in the pre-battle animation like you could in the old games. They looked at me as if to say, “Really?” 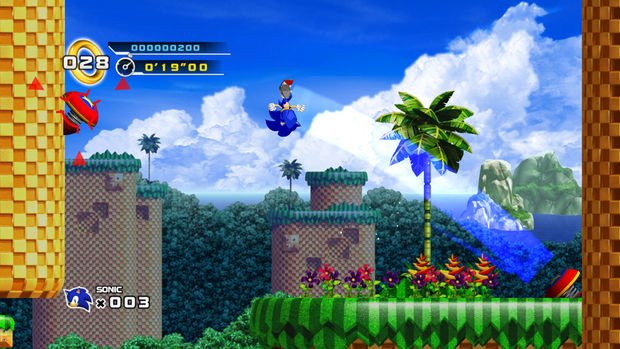 The presentation is quite nice in Sonic 4. I think that if you took the design philosophy of the original games and use them in the current technical environment, the end result would be a lot like what Sonic 4 appears to be. The visuals are very vibrant. They still have that rendered-3D-on-a-2D-plane look, but this time they’re actually 3D, and the game looks that much better for it. The game sticks to bright greens and blues, but with the graphical horsepower of the PS3 and Xbox 360 cranking those colors out, Sonic 4 looks like how you would always dream the next numbered sequel would look. There are some nice sparkling water effects and some neat blurs and animations, but the game really stays true to its roots and doesn’t try to do anything crazy or off-the-wall. The only issue you may have is with how smooth Sonic’s animations are. But, once you get over that, you’ll likely agree that he’s never looked better!

I really dig the retro touch in the musical score. The music is classic Sonic, as they brought the original composer back to do Sonic 4‘s score. It sounds like it’s played back with 16-bit synthesizers, but this time with CD-quality audio. This is a nice parallel to the game’s visuals, which look like the old games, but have also been improved with technology at the same time. Overall, from what I heard, the music is fun, and very true to the original scores. There’s new “invincible” music, and it’s quite cute.

If you’re worried about Sonic 4 being true to the old formula, don’t be. Sega has worked so hard to make the experience line up nicely with your memories of the “good Sonic,” and it really shows. It’s the game that I knew Sega could do. The old saying, “If it ain’t broke, don’t fix it,” has never seemed more true. Congratulations, Sega. You’ve made another good Sonic game.