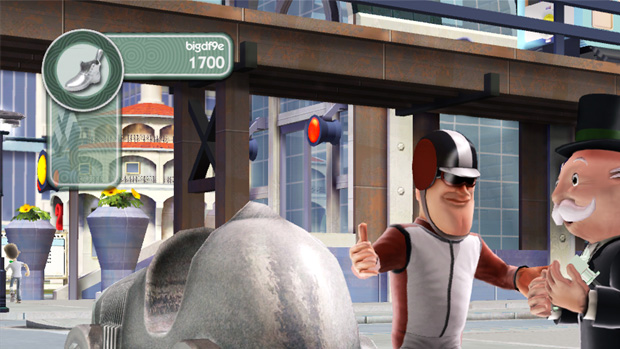 Playing Monopoly on a game console is something you may have done before, but Monopoly Streets takes the game experience and makes it fully interactive. You’re done with the little pawns, plastic houses and that paper money you know you’ll eventually lose anyway.

Instead you’ll get a full-blown online-compatible, immersive world that is inviting enough that it’ll make you want to add that board game to your growing garage sale pile.

I had a chance to check out an early version of the game running on the Xbox 360, jumping into a match with some fellow game journalists, and then later in a one-on-one.

They’re reworked this game to make it seem like all the little properties, characters and hallmarks of the popular board game have come alive around you. Instead of looking down on the board, imagine being right there at street level, looking at your own character as it travels the familiar path that you’ve known for so long, but now with real buildings and other people. All the original pawn characters and vehicles are fully animated. You can even use your own Xbox Avatar as a character. The people in the background of the city are populated by your friends list.

The new side view and all of the moving animations sounds like something that would take you out of the board game experience, but somehow it seems to make the game more fun. Seeing your character slowly take over the town is neat, and it seems to have more of an impact on the other players, especially when they have to watch you doing something that puts them at a disadvantage. Of course, these animations can be skipped if you’d like.

In the distance, in what would typically be the middle of the game board, is a cityscape. That cityscape is made up of buildings that represent your corporate headquarters. This skyscraper will either grow or shrink to represent changes in your monetary worth. It’s fun to watch your building tower over your friends’ HQs when you acquire property or charge them for passage. 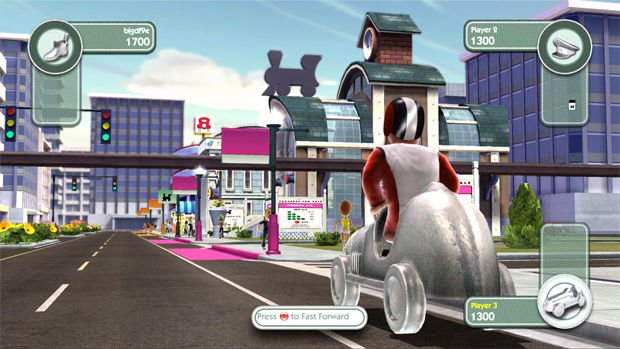 There’s a new gameplay feature called Auctions. Instead of a simple, boring purchase, an auction has all players competing to place bids in a set timeframe to acquire property at the lowest price.

If you’re not down with all the fancy visual changes, you can still opt to play with the classic game board. You won’t miss it, though. The game even gives you the ability to move and “look ahead” to where your dice roll may take you. And here’s a nice touch: You can even stop your dice roll at any time, just like clamping your hand down on them in real life.

As you play and win matches, online or off, you’ll earn cash that you can use to purchase other themed game boards. MS is still early, so we didn’t get to see much in the way of new cities, but we’re told that many real cities will be represented, with some being unlockable after meeting certain requirements.

Have you ever played Monopoly with your own “House” rules? Monopoly Streets is totally open to that, with options to set everything from starting cash and property to things like Free Parking paydays and double “Go” salaries. Even the popular house rule that lets you buy hotels at any time is available in the settings. You can change win conditions and more, and then save your own rules in save slots that you can recall at any time.

Looking at what Monopoly has become in this new version after all of these years is fun, especially when you consider that the family game classic is now 75 years old. I bet the original creators never could have imagined that you’d eventually be able to play in the world of Monopoly with friends online, seeing your actual character move, doing things like actually working to improve a property. I bet they’d love it, though.

Monopoly Streets is coming in October for the Xbox 360, PS3, Wii and Nintendo DS.