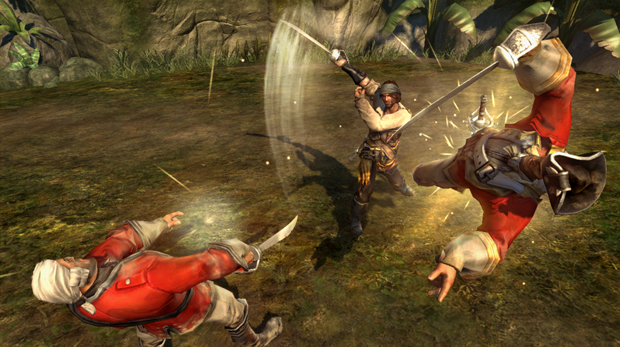 Something to keep in mind here is that Armada of the Damned doesn’t have any restricting ties to any one Pirates movie. Instead, it seems like they had a lot of fun with this one, and it makes for what seems like it will be a very enjoyable action RPG when it releases next year.

As all pirate situations start out, I began on a deserted island. I encountered a deformed, twitchy local who seemed to have body parts that had mutated into marine life, complete with gross barnacles and scales. He was lucky, as some of the other locals had fully deformed, and were beyond help. We encountered him just in time for him to tell us that a cursed pirate ship figurehead was sitting in the place where a charmed idol should be; that has angered the gods, and caused the mutation.

In conversation, you’re presented with a dialogue tree that you can navigate with the left analog stick, making moral and other choices with a simple tilt of the stick. We were told that all choices made will see changes in the game along the line, so we chose to play it safe and help out the deformed guy and his fellow natives by seeking out the figurehead and replacing it with the proper idol. 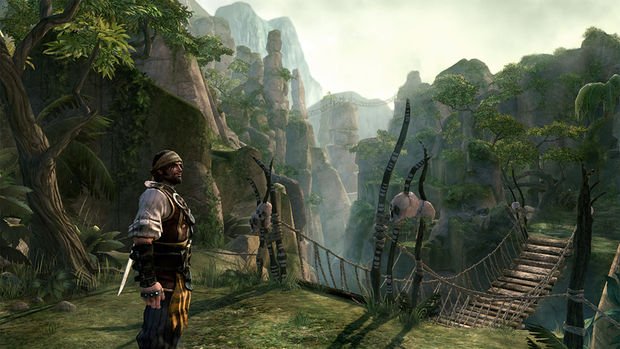 This started our quest across the island, which was so controlled that we even came across a cute sign blocking a pathway that wasn’t finished yet. It read “Closed for E3.” We quickly came across the first enemy, a fully mutated local, to get our first taste of combat. Buttons are assigned to swordplay, and combos are possible with some effort. All of these moves can be punctuated by gunfire from your pistol. We were also able to curse an enemy by holding the R2 button and hitting the square button. This stuns the enemy, leaving them open for more swordplay, making them easier to take down.  The curse can also spread to other nearby enemies, making your work much easier if you time it just right.

Combat control was tight and the combos flowed nicely, though some of the aim of the animations, like the sword-throwing finishing move, seemed to be a bit off. We were reminded that the game is still early, though.

A sub-boss, a larger, kind of crab-like mutated villager, put up a bit of a fight, but eventually went down with some cursing and fancy sword work. After this we gained enough experience points to be able to level up from the game’s skill tree. You’ll see land abilities, which are used in this type of questing, and sea abilities, from the on-water segments we didn’t see, in this skill tree; you’re free to level up whatever you wish as long as that branch is open. I leveled up my “Pistol Expert” skill, which increases damage from gunfire.

There’s no real platforming involved in Armada of the Damned. It’s all on-foot exploration, though we did encounter some basic triggered mobility, like jumping from a ledge to a vine. That’s not controlled, though — it’s just an animation. 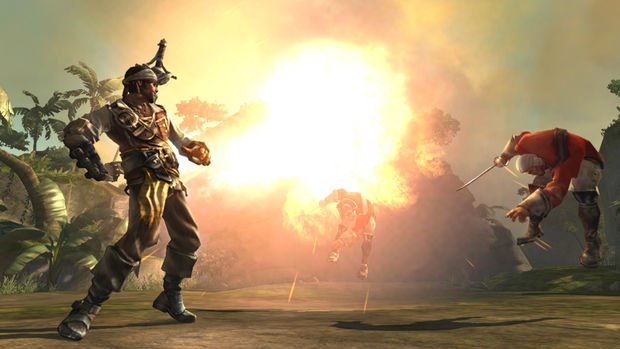 We eventually made it up to the base of a volcano where we found the figurehead. Removing it and replacing it with the idol immediately relieved the natives of their curse, but it also triggered a boss battle where a huge, crab-like beast came out from behind the mountain. I fought it, one-on-one, in a pretty epic and impressive looking fight that had waves of fire crashing in the background, with burning embers flying about. Luckily I had some explosive bottles to throw at the crab thing. Eventually it would become distracted and confused, and I was able to attack and take it out, saving the day.

This was just one example of the many land-based quests that will be in Armada of the Damned. As it was explained to me, my choices in this quest would open doors to other quests that relate to it. Changing your answer would essentially change your adventure, making this game seem very vast. And we didn’t even get to see the sea-based gameplay yet.