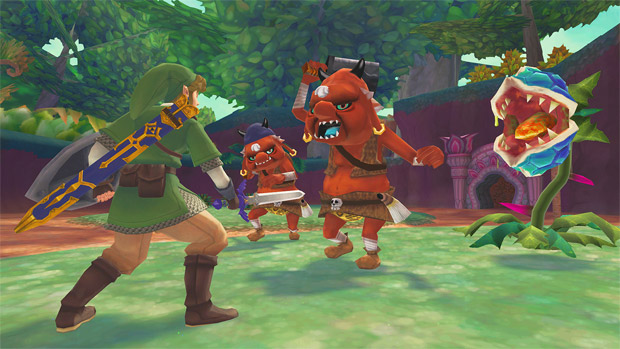 As many fans had hoped, Nintendo revealed the latest installment in the Legend of Zelda franchise today. Nintendo bigwig Shigeru Miyamoto took the stage to demo The Legend of Zelda: Skyward Sword, braving fierce deku babas, misfiring bombs, and mysterious “control interference” issues to show off the new title, and I have to say, it’s looking damn sexy.

While most of the action is what we’ve come to expect from the Zelda series, the art direction sports a unique fusion of Twilight Princess by way of The Wind Waker. Link is once again a teenager, but now the world is a colorful fantasy land rendered in tastefully restrained cel shading, in sharp contrast to the overuse of browns and bloom lighting seen in the landscape of Twilight Princess. It strikes the perfect balance between realism and cartoons, and will surely age less quickly than the visuals of the last console installment.

While Twilight Princess had motion controls grafted on to what was essentially a Gamecube port, Skyward Sword is designed from the ground up for the Wii Motion Plus. For example, in order to defeat a deku baba in the demo, Miyamoto had to swing the Wiimote in the direction that the deku opened its mouth, or else the deku baba’s hard exterior would block the sword. It seems they are finally delivering on the promises made for the first Wii Zelda. Hit the jump to see more gameplay footage from the showfloor demo!