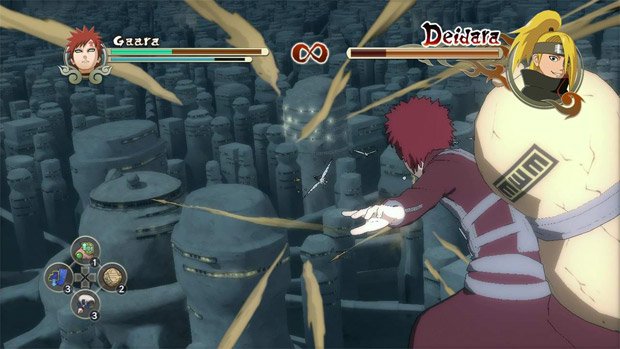 Or even better, in some ways!

I’ll admit I stopped following Naruto a while ago, but watching the new trailer for Naruto Shippuden: Ultimate Ninja Storm 2 makes me wish I had kept up with it. The first Ultimate Ninja Storm looked fantastic to begin with, but the new one comes even closer to mastering the art of cel-shading, almost perfectly replicating the anime’s style and at times surpassing it. Even if you’re not a fan of the series, you have to appreciate how far cel-shading has come from early attempts at simulating 2D animation.

Furthermore, look at those special battles they’re highlighting! Sakura fighting Sasori’s hundred puppets, an aerial battle between Gaara and Deidara, giant summon matches…it’s all quite amazing, at least in terms of eye candy and grandiose spectacle. Furthermore, Tekken 6 fans have extra incentive to pick up the game, as Lars Alexandersson will be included as a bonus character, wearing an outfit designed by Naruto artist Masashi Kishimoto.

Naruto Shippuden: Ultimate Ninja Storm 2 will be released in Fall 2010 for PS3 and Xbox 360, a first for the traditionally PlayStation-exclusive Ultimate Ninja series. Hit the jump for a producer interview showing more of the game’s wonderful graphics.