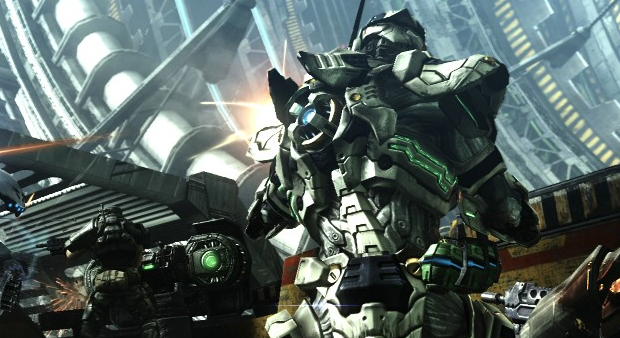 We already have a full, official preview for Vanquish courtesy of Dale North, but being the Sega Addict I am, I had to check out some of the publisher’s new titles for myself. First among them was Platinum Games’ Vanquish. Since we have previews for the games I checked out, these “Jimpressions” pieces will be short, punchy, personal reactions to some of the games I stood in line for like a chump.

So, Vanquish. Bloody terrific. It’s Gears of War meets Bayonetta, minus the tits and plus ranged carnage. Completely over-the-top, chaotic, and full of bullets, the game is about as ridiculous as you would expect from Platinum. What really surprised me about the game was just how “full” it felt. The mayhem assaults your ears and eyes from all angles, really making the battlefield feel alive as digitigrade aliens and heroic space marines shoot the piss out of each other.

The rockstar-style knee slide, used to whizz around the map, is absolutely glorious in its outright stupidity. The graphics are great and those offended by Bayonetta‘s PS3 performance will be thrilled — I played the PS3 version and it ran like liquid silk. The only downside I saw was the lengthy and repetitive boss battle at the end of the demo. Bit of a weak end to a great battle.

It would appear that Platinum Games has done it again with Vanquish. Only the fools doubted them.