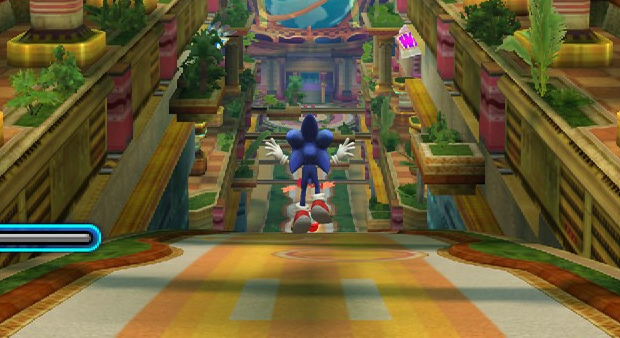 Dale North had told me while previewing Sonic Colors that he felt the game was better than Sonic the Hedgehog 4. I was hesitant to believe him, especially given Sonic’s rather miserable history on the Wii. I’m not prepared to agree with Dale yet, but my experience with Colors was pretty positive. To complement our full preview, here are some quick Jimpressions for you.

So, Sonic Colors is like Sega took Sonic Unleashed, extracted the good bits and then threw 90% of the liquidy bullsh*t in the trashcan. At least that’s what I felt after playing through two full zones and a boss battle. The game shifts between behind-the-hedgehog Sonic Adventure-style running and true 2D platforming seamlessly, and really feels like a continuation of Unleashed‘s “daytime” levels with the Werehog crap left firmly behind.

The “Color” powerups are easy to activate, although a little hard to control without practice. They’re rather fun and clever, though, especially the Yellow Color, which lets Sonic drill through the ground in 2D areas. From what I saw, the game looked hugely promising. However, so did Sonic Unleashed when I first tried that, so I’ll reserve judgment for now. Cautious optimism is the recommended stance until more gaming is done.