My love for hacking and slashing is no secret to the good gentry who read Destructoid. That is why, without an appointment, I marched over to Capcom’s booth in order to play Sengoku Basara: Samurai Heroes. Yes, I ignored Dead Rising 2, Marvel vs. Capcom 3, and everything else Capcom had.

Well, it helped that there were lines for all that stuff, while everybody was ignoring Sengoku.

Nevertheless, Sengoku Basara was my game of choice, so I grabbed a Wii Classic Controller Pro and hopped into the world of ridiculously dressed Japanese warriors and huge metal robot samurai. Read on for my hands-on with Sengoku Basara: Samurai Heroes. 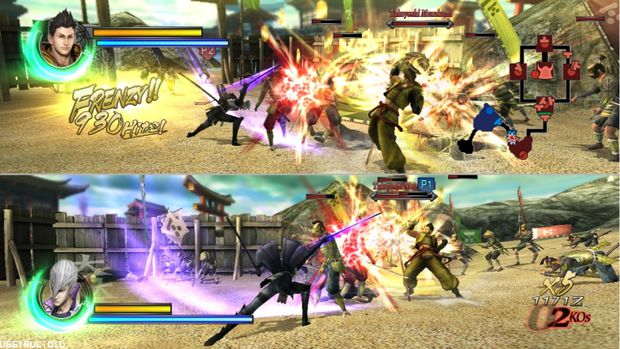 Multiple characters were available to choose, and I went with Mitsunari Ishida. Resplendent in black and purple, with white hair that ends in a ridiculous point half a foot away from his head, Ishida looks less like a great military strategist and more like the lead singer of an unsigned emo band in Kent.

Ishida fights with a katana, and it’s safe to say that he fights ridiculously with it. The combat, as with all Sengoku Basara games, is fast paced, over the top, and incredibly silly, more so than even the Dynasty Warriors games from which it copies its button mashing formula.

Ishida’s regular attack looks beautiful and outrageous, and even though you’re just pressing one button, the flurry of sword slashes and swathe of dead soldiers it results in would make bystanders look as if you’ve just performed some complex fifty-button combo. There is also a strong attack, and a special power meter which is filled by giving and receiving damage. Once activated, the special attack will cause the player to be invincible while the chosen character pulls off a stupidly powerful move. 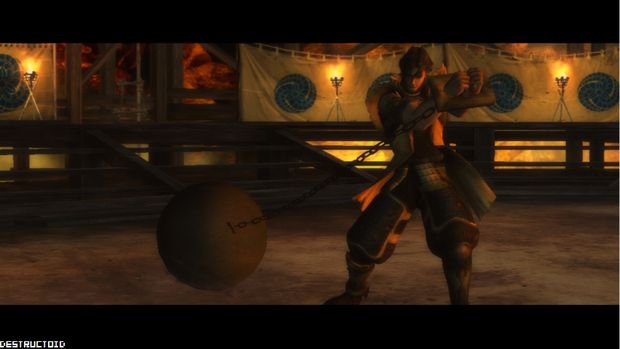 Characters get access to a special skill with the press of a shoulder button. In Ishida’s case, he was surrounded by glowing yellow energy and I think it meant he pulled off stronger attacks. Since there was nobody to ask and the game was so chaotic that I couldn’t tell what was what, I am having to guess a little. It was cool nonetheless, and extra things to do always make for a welcome break from endless button mashing. On that note, each character gets a taunt animation that can be used at any time. Mostly useless, but who doesn’t love a good taunt feature?

Sengoku Basara features a little more strategy than usual with another gameplay aspect lifted from Dynasty Warriors. Now, players must capture bases by defeating soldiers stationed at guard posts. These soldiers won’t defend themselves, making them motionless objects rather than soldiers, but they’re usually protected heavily by regular enemies. Enemy generals must also be defeated, including named and generic warriors. I also had a run in with Basara‘s version of Lu Bu — the robotic (don’t ask) antler-headed Tadakatsu Honda. As always, he is insanely powerful and it’s a miracle I survived long enough. He chased me throughout one level before he ran to a special part of the map to fire lightning bolts. Fortunately, the lightning chicanery caused him to become weak and I was able to beat his metal ass. 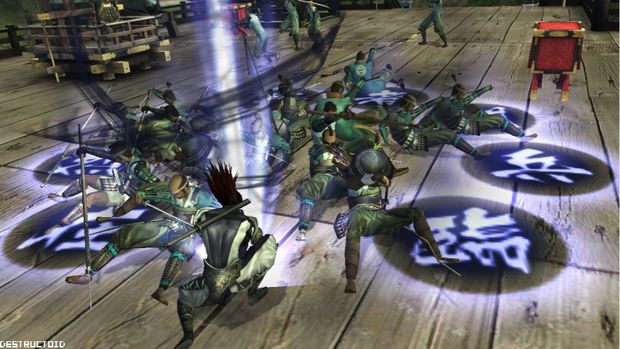 All in all, I was quite pleased with what I played in Sengoku Basara. The game feels like a massive improvement over the thoroughly crap Devil Kings, with a far better difficulty balance and tighter, faster gameplay, not to mention more things that each character can do. The art design is ludicrous but pretty brilliant and the animations are super cool. It also scrubs up well in visual department for a Wii game, although if you’re all about graphics, there’s a PS3 version to sate your need for HD visuals.

If you’re a hack n’ slash fan, Sengoku Basara: Samurai Heroes is one game definitely worth watching out for. I was very pleased with it not being crap.