Koei Tecmo isn’t exactly known for its cover-based shooters. In fact, it’s almost exclusively known for Dynasty Warriors and big tits. Now we have Quantum Theory, a game that makes no secret of its Gears of War influence but does manage to hide a few neat tricks up its sleeve.

It appeared at last year’s E3 as an unplayable demo, but I finally got to play it with my own two hands this week. If you want to know how that went, you’re in the right place, as I am about to tell you. 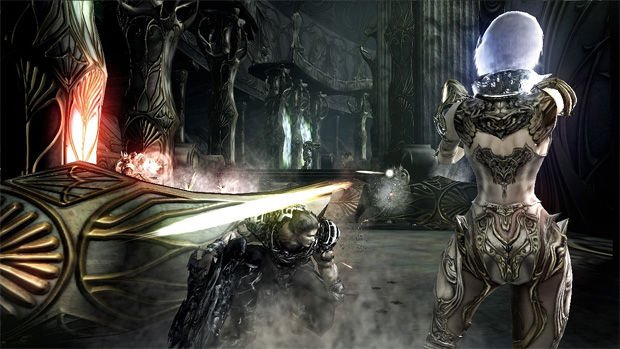 You’ve played Gears of War, right? Good. Then Quantum Theory‘s basics are already yours. The game’s foundation sees you take on the role of a huge meathead with a machine gun who needs to blast away at gun-wielding creatures while cracking wise. Sounds familiar, doesn’t it? Don’t worry, it’s pretty damn cool, even if it’s not the most original concept in the world.

Quantum Theory is set in a “living tower” full of nasties that threatens to destroy the last vestiges of the human race. Playing as Syd, and supported by an AI friend called Fillena, players will need to climb the tower, deal with its shifting environments,and take on not just one enemy, but another evil force that wages a civil war.

That civil war theme was noticeable during my playthrough, as I would find myself facing off against two groups of opponents who were pounding the crap out of each other. It would appear that players can use this to their advantage, although the first enemy that saw me promptly forgot about the current skirmish and focused entirely on my own party.

Combat consists mainly of sticking to cover and shooting whatever moves, but Syd and Fillena have some useful little tricks to keep things fresh. First is the “Combo Throw”, in which Syd throws Fillena at high speed toward the opponents. Fillena will then stun enemies upon contact, allowing Syd to nail some free shots. The Combo Throw can also be targeted toward a particular enemy, which also allows Fillena to do serious, often fatal, damage to the unfortunate creature. 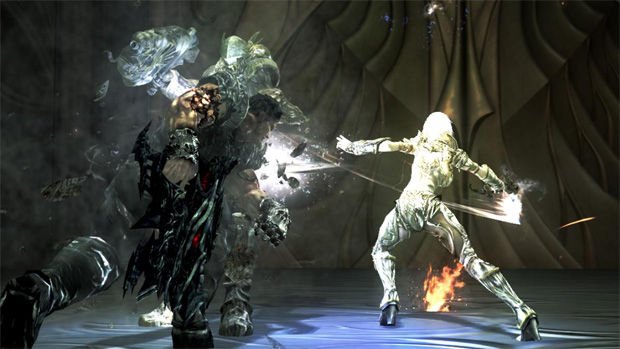 Syd and Fillena also work together for melee combat. Melee consists of a series of timed button presses in which players string along a combo in time to a strict and quick beat. Successful performance of the combo results in the two heroes teaming up for some thoroughly brutal close quarters moves. It’s pretty damn hard to pull off though, and the risk of getting blown to bits before one gets near enough is a bit too great to feel worth the potential reward.

I also faced a rather huge boss at the end of the demo, with a huge arm that served as its weak point. Being able to fire missiles, destroy cover and unleash a deadly charge attack, this boss was pretty damn challenging. In fact, the whole of the Quantum Theory demo was rather tough, offering stiff resistance and swiftly punishing those who were impatient and tried to rush ahead.

Quantum Theory is a promising title. The cover-based shooting works decently and the unique teamwork of Syd and Fillena is fun and useful. It looks like this game will be pretty damn good when it comes out, although I’ll have to wait for the full game in order to know for sure. In the meantime, color me optimistic.