Admittedly, when Vanquish was first announced, I didn’t let it make much of a blip on my gamer radar. Sure, Shinji Mikami is a legendary game designer, noted for his work on the Resident Evil series, and arguably popularizing survival horror.

But the concept — a Japanese take on the traditional Western third-person shooter? I know how this ends: a game that feels like a corny, try-hard copy-cat of better works by designers who already “get it.” But then I had a chance to get my hands on a controller and actually play it. I’m ready to eat crow — the demo I’ve played was awesome. 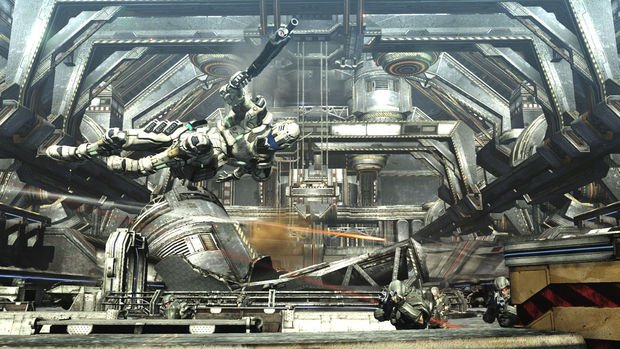 The set up: Earth’s resources have been depleted, and its two major super powers — Russia and the United States — fight to find a new source and control its distribution. They take to space, the US creating a station where it plans to harness the power of the Sun. Russia has a similar goal and its own power source; it blasts San Francisco with a beam from outer space, leaving it in ruins.

In Vanquish, players step into the role of Sam Gideon, part of an elite military scientific group. The group has developed a unique battle suit, one that increases reflexes, or allows the one wearing it to warp time. The game uses these abilities to make it stand apart from other third-person shooters, increasing the intensity and putting the player in situations other games simply wouldn’t be able to touch.

On its surface, Vanquish gives quite a few nods to Epic’s Gears of War. It’s all about third-person shooting, with big, over-the-top battles you fight alongside a computer-controlled squad. Where it sets itself apart is in its speed and its flashy style, which players have now come to expect from Platinum Games titles. 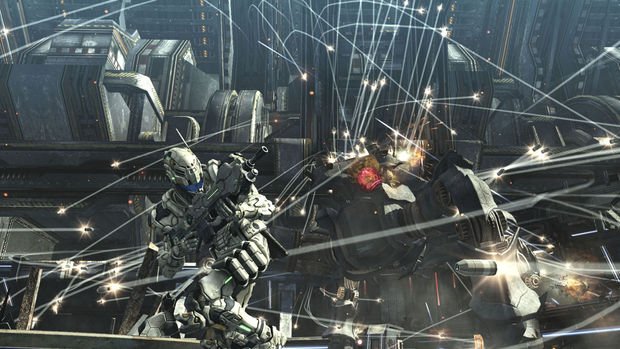 The cover system you’re already familiar with is in place here; Gideon can hide behind a number of objects in the environment, as you’d expect. It’s how he does it that sets it apart. Using the game’s dash (a limited), I was able to quickly speed into and out of cover. Coming out of the maneuver, sometimes Gideon would perform a flip, an automatic (and seemingly random) animation that does nothing but look super freaking’ cool.

Saying that Vanquish‘s combat is frenzied is an understatement — it’s absolutely batshit. From the moment by demo started, bullets were flying, mechs were coming at me, and I found myself quick dashing to and diving behind cover. What was so great about the experience, however, is that no matter how hectic the action got, I never overwhelmed; control felt both familiar and intuitive Despite the fact that it looked like I was performing complicated actions (Gideon was sliding, flipping, and hopping all over the place), those actions were at the tips of my fingers and a few button presses.

The game’s unique style extends to Gideon’s use of weapons, which are directly tied into his suit. Instead of carrying each weapon on his back or on a holster, the weapons morph in on the fly. A shotgun quickly modifies itself to become a rifle, the rifle swaps out to a heavy machine gun on the fly. 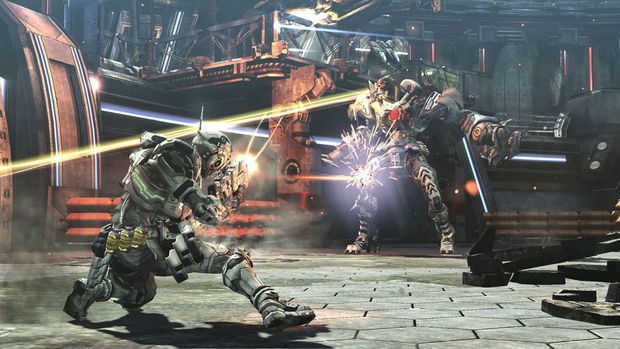 The style and over-the-top action gameplay is also said to play into the game’s rank up system, which will let you upgrade weapons and more. Rank ups are based not only how many enemies you take out, but how you do it. These are called “overkills” flashy, high context sensitive assault moves the player can perform during battle.

It’s too early to tell if Platinum Games will be able to keep this kind of pacing up to support an entire game. But if this early demo is any indication, third-person shooter fans are in for a visual treat as well as some solid action when Vanquish ships this winter for Xbox 360 and PlayStation 3.