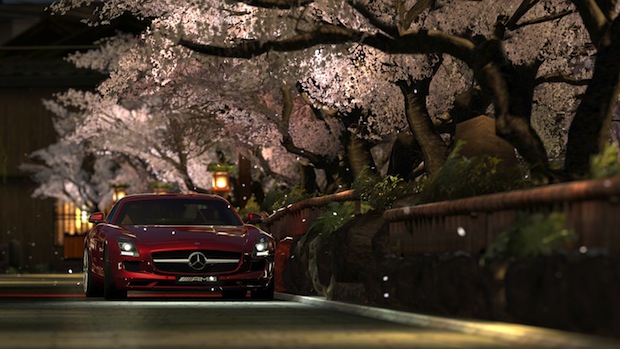 Polyphony Digital’s Kazunori Yamauchi brought some new features of Gran Turismo 5 to E3 this year, with one of them being the game’s new photo features.

One of the game’s photo features is called Race Mode. It lets you use a virtual camera to photograph cars that are racing on the tracks, letting you make your own action shots. After selecting your position you’ll see the camera’s finder mode, which lets you do everything a real camera could do. In this screen you can focus, tilt, and zoom. You’ll see that the shutter speed and aperture are displayed at the bottom of your viewfinder.  There’s an auto mode, but you can also adjust all functions manually, just like a real camera.

The game’s photo Travel Mode features dedicated stages where you can walk around and select a point to photograph cars. The idea behind this is to simulate being able to take your car to scenic locations to take shots. So far there are three locations: Japan’s Gion district in Kyoto, San Gagano in Italy, and Red Bull’s Hangar 7 in Austria. All are said to be highly detailed recreations of the real world area, complete with natural sounds recorded from the actual location.

Demo we saw was in a Kyoto’s Gion.  Kyoto was lovely at night, accented with cherry blossom trees in full bloom. We saw a white Ferrari that sat in a lovely lit night scene, with petals falling in the background. Once you’ve selected a location, you’re in walking mode, free to look around by using the analog controls for movement. You’ll have the option to move to several preset shots in the city, playing with position and angles for dynamic shots.  After finding your favorite spot, you can walk around to find the best angle for the photograph.

Yamauchi said that this mode is ideal for featuring the game’s cars, all of which were rendered at a very precise level. We saw several example images, many of which were stunningly photorealistic.