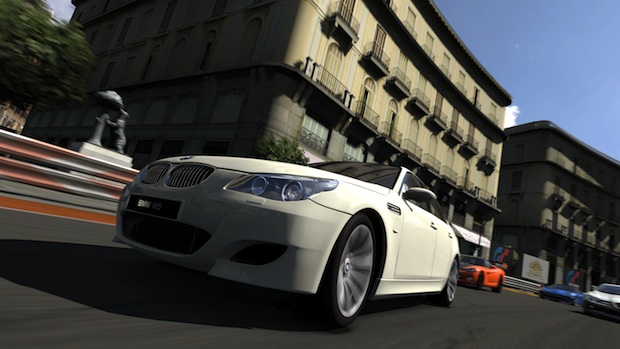 It seems like this is going to be a long, drawn out process of finding out about game features between now and the November 2nd release date for Gran Turismo 5. Polyphony Digital’s Kazunori Yamauchi was kind enough to show us a few new tracks, but even he admitted that more will come later. Thankfully, it  seems like we’re rounding the final bend, as Yamauchi tells us that code we’ll see at Gamescom will likely be final.

Five new tracks were revealed to us in a roundtable event this week at E3: Madrid City, Tuscany, Top Gear’s test course, the Rome circuit, Sarthe circuit and the famed Nurburging.

We saw the Madrid urban city course, which was very beautiful (shown above and in our gallery). It featured scenic skylines made of old buildings from central Madrid. “Urban tracks are the hardest and most difficult to complete. This took us two years to get to where we are now,” said Yamauchi.

The Tuscany course in Italy contrasted strongly. Instead of the tightly packed city roads, it featured arid, open locales, with lovely sky views.

The Rome course featured the Coliseum in stunning detail. Some may remember the course from GT3, but the track layout is different. This track around two years to totally design and complete.

TopGear’s test track is uniquely shaped. It moves in an strange figure eight, with a cross line in the center section, making for opportunity for pretty bad crashes.

“We had a lost of tests in the company and had many bad accidents there,” Yamauchi commented. “When you try driving it, it’s hard to find the racing lines, but once you get a hold of it it’s really a lot of fun.”

Nurburging: The scenery from the 24-hour race of this famous course is quite detailed. You see a lot of camping tents and cars everywhere. In real life, you’d only see this during the 24-hour races. Nurburgring course is compete with a detailed replication of its famed road surface graffiti. This has been replicated across the whole 20km length, painstakingly recreated for the in-game course.

On this course, Yamauchi explained, “Every year there’s something different on the track, so it was a lot of work to keep it updated. I said ‘complete,’ but I did have to go in and delete some of the profanity. The legal team of SCE Europe had to really look through it so we wouldn’t get in trouble.”