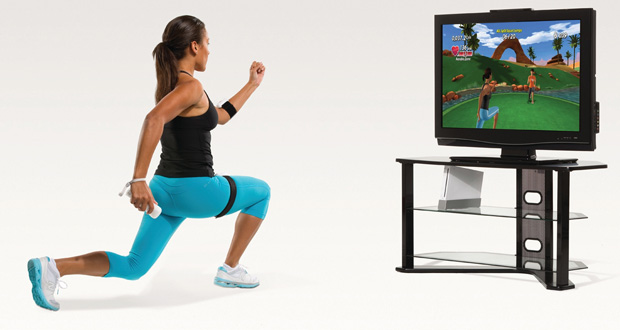 You may have written off EA Sports Active as that Wii game that makes you move your body when you don’t want to. It was that, and it still is, but now the series has branched off onto the PS3, and it’s bringing along some new technologies to make you a fit gamer.

When I first saw this new game, EA Sports Active 2, two things struck me. The first is that the guy playing the game was ripped, and had arms that were thicker than my legs. I saw this after I finished eating a Mexican food feast, so the guilt was heavy.

The second thing I noticed is that Ripped Guy was lifting real weights in front of this PS3-equipped television. I thought that this was a far stretch (hah!) from those flimsy elastic bands that came with the original Wii titles. 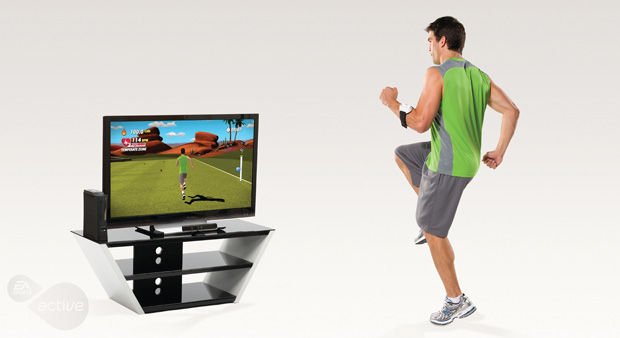 Active 2‘s biggest advancement is the incision of a wireless sensor system. You’ll attach these to your arms and legs, and then equip a heart rate monitor before you begin the exercise program. If you’ve never tried the Wii version, know that the biggest advantage with this new tech is freedom of movement.

Holding a Wii Remote and Nunchuck made large movements cumbersome, and when combined with the elastic stretch bands, things sometimes became quite frustrating. Now, with these band-style sensors, you’re free to move and hold weights, with nothing holding you back, or slapping you in the face.

These sensors track your movements in exercise, much like the Wii Remote and Nunchuck did in the original games. But the new heart rate monitor is actually doing the most important work, which is checking the effectiveness of the exercises you’re doing, and then giving you accurate feedback on how your body is benefiting from them.

A new online fitness tracking hub takes your workout data and stores it “in the cloud,” giving you access from a log in, letting you get fit wherever you happen to be. The PS3’s online connectivity also adds the ability to download newly added exercise programs, giving you much more usability for your original software cost. 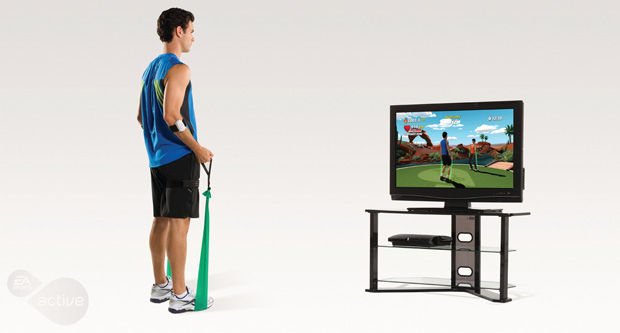 I let the fit people test the game as I watched on and spoke with EA reps. In comparison with my experiences with the Wii games, it looked like the exercises were more responsive. Some of the over 60 exercises I saw also looked to be bit more challenging, though I’m told that there are several difficulty levels as well as programs that will let you target specific body zones and fitness goals.

Ripped Guy was breaking a serious sweat doing curls with real weights, which reminded me of complaints I heard on the first two Wii games. Those that were already physically fit had little interest in holding Wiimotes and stretching elastic bands.

Now, with EA Sports Active 2‘s improvements, they can look at the software as a real fitness tool that can give them structured workouts and useful feedback. I feel like Active 2 is closer to a gym away from the gym than anything else I’ve seen.

EA Sports Active 2 will be released this fall on the PS3 and the Wii, and will also come to the iPhone/iPod in some form.