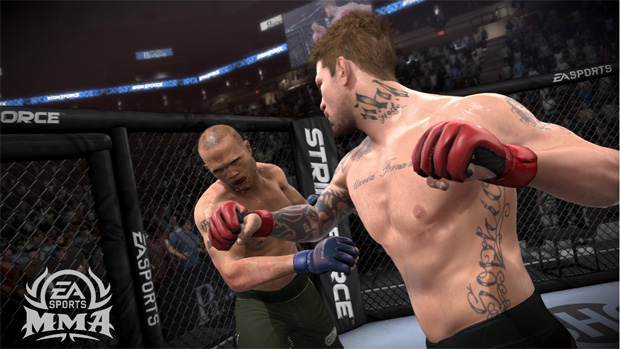 Fresh off countless sessions of THQ’s UFC Undisputed series games, I felt like I could take on Destructoid Editor-in-Chief Nick Chester in a couple of rounds of EA Sports MMA. It’s not that I consider these to be similar games (they’re quite different, actually), it’s just that I felt like I was a bit more warmed up than he was at the sport. He still won. But we both came away with some knowledge of how EA’s take on MMA works.

While I feel like both games offer a certain measure of authenticity, EA’s take has a control method that seems pretty intuitive for the sport, and one that will feel familiar to those that played EA’s Fight Night games. This has the diagonals of the right analog stick mapped to each of a fighter’s limbs. A flick to the upper right would throw a right hand jab. A curve of the stick along the upper left would throw a left hook.

You’d imagine fighters mindlessly flicking the stick around to fight, but that doesn’t work. I tried. Instead, well-timed jabs mixed with modifiers (shoulder buttons) mixed up the action, making for a fight that felt more like a string of moves moves than a series of button commands.

As a Mauy Thai fighter, I had a leg up (hah!) on Nick for a bit with some foot-to-ear kick action, performed with a sweep of the analog stick. I was able to wear his stamina down a bit until he saw that I was leaving my body open, and started drilling me with body blows after my ill-timed kicks.  I was able to defend, but I wasn’t privy to the schooling that Nick received on the clinching and takedown controls that MMA features.

Clinches are assigned to a single button, as are shoots for takedowns and submissions. Thankfully, so are the stops to these attacks — one button. Nice and simple. While I appreciate UFC Undisputed‘s moves toward realism in their choice of control schemes for clinching, I definitely also appreciated EA’s move toward ease in MMA here.

Our time was with simple, one-on-one quick matches, so we can’t speak on the game’s online features or fighter creation modes.