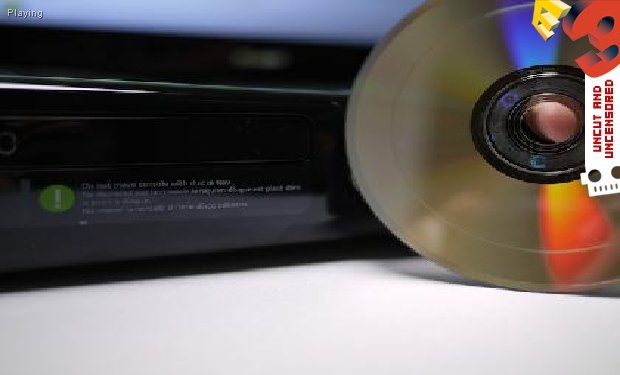 If you own an Xbox 360 you know the most annoying thing about it is the RRoD. You probably know the second most annoying thing about it as well, and that is that it can scratch the sh*t out of your discs. Nothing like plopping down $60 bucks just to get home and have the game ruined because your console destroyed it.  You’d think this would be something the Microsoft would take care in their new version of the console since it seems they’ve taken care of many of the other issues the console had. Think again. Our intrepid E3 team tested the console out with an Alan Wake disc and then Nick decided to move it. Suddenly all hell breaks loose. Goodbye, Alan Wake.

Sure, there was a sticker on the damn thing saying not to move it, but it isn’t like he was tossing it around the room. They’re planning on having gesticulating children play Kinect anywhere near this thing? Some games are going to be getting destroyed, people. Looks like everyone needs to be really, really careful around their new 360s while they are on or their games are going to get wrecked.

Nick and I were at an unboxing event for the newly announced Xbox 360 today, and it was there that he committed a sin that will never be forgiven. Well, it wasn’t a sin as much as it was a total waste of a perfectly fine copy of Alan Wake.

You see, despite the warning on the front of the new Xbox 360, Nick picked up the system to move it from horizontal to vertical position while the game was booting. The resulting sound was close to that of starting a garbage disposal with a fork in it. After hearing the horrendous noise, Microsoft people immediately ran to our area with concerned faces. “Yeah, you can’t do that,” we were told. As you’ll see in the video, to Nick’s embarrassment, Microsoft’s Bill Beldan pointed out the prominent warning sticker right there on the system’s face, which clearly explained that you can’t move the system when a game is in use.