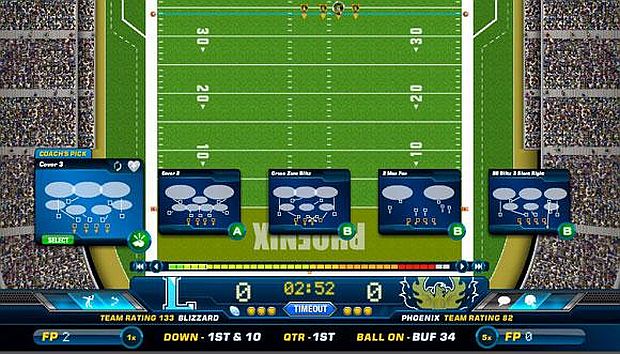 Quickhit Football was a weird game for me to play. As someone who doesn’t really pay much attention to football, a game that acts as a fusion between fantasy football and and RPG is great for fans, but not quite for me. However, that’s not to say that the game is bad! It’s just something different for fans to play on browsers, and especially for those who dislike other football titles.

Basically, Quickhit Football is a browser-based title in which players work as a coach moving through a season. As coach, all of the players have their own set of stats, and plays work out based on these stats. As players move up in their coaching level, they will be given Coaching Points to be spent on new plays, training for players, and more. Plays themselves must be unlocked, but they can be unlocked with Coaching Points, or they can be unlocked by beating famous coaches. Honestly, it looks very much like an RPG, as stats are of utmost importance, and all the actions play out on-screen in front of you. Since this is a free to play game, players wanting to skip ahead to the cooler plays and players can just drop some real life cash and buy more Coaching Points.

Probably the most interesting bit of news about this title, for those who care, is the addition of the NFL license. The specifics on this agreement wasn’t made clear, but either way it’s a great coupe for the developer, which is also called Quickhit. The NFL will offer full support of the title, and players can even enter the beta right now.