Confession: everything you’ll reader after the jump was not written at E3. It was written about a month ago, based on a demo Activision showed us of their upcoming title, DJ Hero.

We were hoping that Activision would bring DJ Hero to E3 and put the turntable controller in our hands; it is coming out this Fall, after all. But unfortunately, that wasn’t the case. Why they’re not letting us play it (it’s not even on the floor) we don’t know — it not only looks polished, but it looks extremely playable. And it looks fun, but that’s not something we can confirm.

We can reveal a slew of details, much of which will act as a recap of the information you’ve received on the game over the past few weeks leading up to E3. Check the detailed preview after the jump.

Getting right to it, one of DJ Hero’s biggest innovations is most certainly its impressive (and rather sexy) turntable controller. Originally designed in-house by Freestyle Games, and later with the help of long-time music hardware designer Red Octane and aesthetic design group Fuze Project, the final piece of equipment is as exciting as you’d expect it to be.

The first part of the controller is the “Platter,” what laypeople would likely recognize as a turntable proper. Designed to spin a full 360 degrees, the Platter features three buttons that coincide with streams on the game’s note highway, which mimics the look of spinning vinyl. The green and blue tracks each represent records, different musical parts of the song’s mix. The red button, which sits between two, is used to trigger samples in the track.

As the note highway spins towards you, you’ll be required to hit the buttons in time with the music and what’s displayed on screen, as you’d expect. The Guitar Hero influence is immediately obviously. The first twist in DJ Hero is that the green and blue tracks feature longer notes that must be held, as opposed to single button presses. In Guitar Hero, the idea here was a sustained note or cord that could be manipulated using the whammy bar; in DJ Hero, this represents a scratch section. 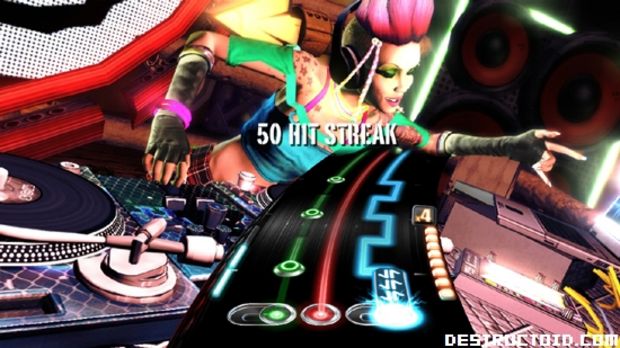 Scratch sections are straightforward in theory — simply press and hold the button while moving the Platter back and forth in a scratching motion. In the easier difficulties (Easy and Medium), you can scratch however you want in that section. As the difficulty increases, things are a bit stricter; arrows displayed along these scratch sections show you which direction you should be moving the Platter during the scratch.

Once you’ve gotten the basics down on Easy, yet another component of the turntable controller and the gameplay is introduced — the cross fader. On a real turntable, the cross-fader does exactly what it sounds like it should do — it allows you to fade (or quickly swap) between two records. In DJ Hero, the same concept applies. An line on the note highway shown on the green and blue tracks will tell you where you’ll have to move the cross fader. When you see the line on the green track push out to the left, you’ll quickly slide the crossfader of the left to follow along; on the blue track, the line moves to the far right.

Like Guitar Hero, the key to high scores will be big combos and the subsequent triggering of DJ Hero’s version of “Star Power,” called “Euphoria.” You can store up to three “Euphorias” at once, and you won’t have to do anything too crazy to activate it — it’s simply a matter of pressing a button on the turntable controller. 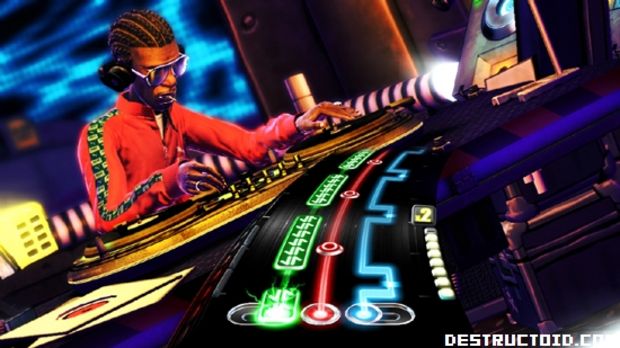 For hardcore players, that’s not the only way to drip each song dry of points. The turntable also features an effects knob, put into play during sections that feature an orange stripe, which works sort of like the guitar peripheral’s whammy bar. You’ll be able to change the songs pitch, as well as play with other effects to earn additional points.

Additionally, hitting a certain number of combos will fill up a meter that can give you a rewind ability that can be triggered by spinning the platter a full 360. This will allow you to rewind the track a bit, letting you replay a section and eke more points out of the song. While it sounds like it would be disruptive to the flow of the track, in the demo we saw the game seamlessly picked up the beat. Whether this was due to the experience of the player is unclear, but it sounded completely natural within the context of the music.

On paper, putting together the button press, the scratching, and the cross fader might sound a bit like rubbing your belly and patting your head at the same time. Seeing it in action, it’s certainly just as intimidating… but it looked damned cool. Seeing Freestyle Game’s Jaime Jackson tear up the turntable, deftly following on-screen cues as he bounced his head to the beat, was a blast to watch. A stuffy game demo room was easily turned into a bangin’ club, no thanks in small part to the music. 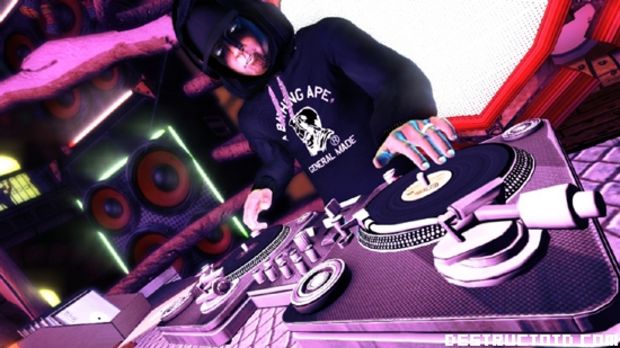 DJ Hero will feature 100 individual songs, with 80 unique mixes that will be entirely exclusive to DJ Hero. The genres the game covers is pretty incredible, as well – hip-hop, pop, electronic, rock, and Motown, to name a few. Artists name-checked by Freestyle Games to appear in the game include: David Bowie; Beastie Boys; Beck; Marvin Gaye; Jurassic 5; Blondie; Rick James; Billy Squier; and 50 Cent. All of the tracks will be mixes (or mash-ups) of the licensed tracks, created by DJs in Freestyle’s London studio. Don’t think for a second they’re just being thrown together by an experienced audio team, either – the crew features World Champion scratch DJs, as well as radio DJs from popular stations in the UK. Activision is still holding the final track listing close to its chest, but in our demo we heard (and saw) two impressive mixes: Benny Benassi’s “Satisfaction” versus Black Eyed Peas “Boom Boom Pow” and Gwen Stefani’s “Holla Back Girl” versus James Brown’s “Give It To Me.”

The game will also feature an original mixes by DJ Shadow, Z-Trip, and DJ AM, all of who will also appear as characters in the game. We had a chance to hear DJ Shadow’s track — exclusive for DJ Hero — a mind-blowing mix of Chuck Brown’s “Bustin’ Loose” and The Zombies’ “Time of the Season.” It wore the mark of a classic DJ Shadow track, dense with a disgustingly hot beat holding it all together. According to Freestyle Games, DJ Shadow has also been instrumental in shaping the game.

“For me personally, he’s been an idol of mine since I was a kid,” Jackson said of Shadow. “He’s now in my cell phone and calls weekly to talk about the game and give us ideas.”

Watching and hearing the game comes across like a party, and it’s likely that DJ Hero will certainly kick off a few. But for onlookers who want to get in on the action, the game also features a three multiplayer mode. “DJ vs. DJ” will require two turntable controllers, and can be played both on and offline. Plastic instrument aficionados will also be happy to know that DJ Hero will feature a Guitar vs. DJ mode as well, with 10 tracks specifically designed for this mode. Finally, you’ll also be able to plug in a microphone for vocals, in case someone wants to freestyle over a track or just yell “What what? Brooklyn in the house, remix!” over your favorite songs. 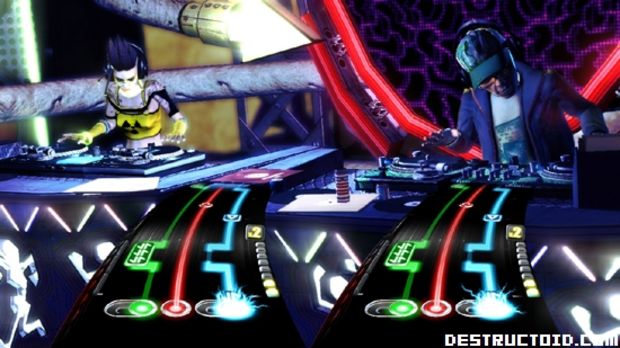 So far, DJ Hero is looking impressive, perhaps more so than we had first expected. It’s easy to write it off as Activision pushing to invade another segment of the marketplace with its “Hero” series of games, and let’s face it — it is. But it doesn’t hurt that both the gameplay and peripheral look solid, the music sounds hot, and most importantly, it looks like a hell of a lot of fun to play.

Unfortunately, that’s the one thing we haven’t done yet – play it. It does look a bit complicated, and we suspect there will be a bit of a learning curve getting used to the new peripheral, but that’s to be expected. We doubt anyone cleared Ozzy Osbourne’s “Bark at the Moon” on Expert the first time they picked up a plastic guitar.