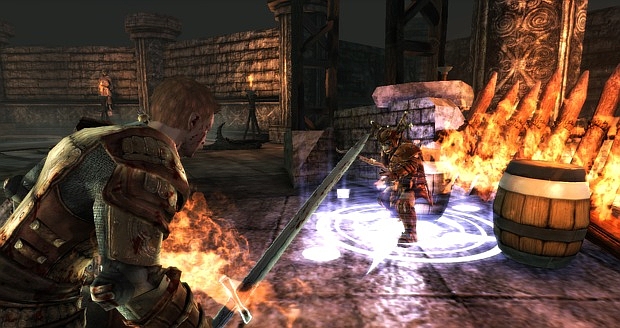 Yesterday at E3, I was able to check out BioWare’s upcoming PC and console RPG Dragon Age: Origins. It was an interesting presentation, if only because it was the first time I’ve seen the game since BioWare started pumping the game as an adult title with crappy industrial music.

The meat of the presentation dealt with something BioWare called “interaction reactivity,” which is a phrase that describes how your interactions with a character can affect the way another character treats you. The example used in the presentation was the traditional love triangle. We watched a protagonist get dirty with one of his party members and then get asked to choose between the two women by the other female character once she heard about it.

The resolution to this conflict forced one relationship to end completely.

The latter half of the presentation dealt with a dragon fight. (Dragons are finally confirmed in Dragon Age: Origins). We watched a dizzying confrontation between the scaly creature and a four character party. The interesting thing about this conflict — other than the complete lack of a HUD — was the resolution: a sword through the Dragon’s mouth as the finishing move. Sizzle.

Origins is on the floor and completely playable, so definitely check back with us soon for more information.