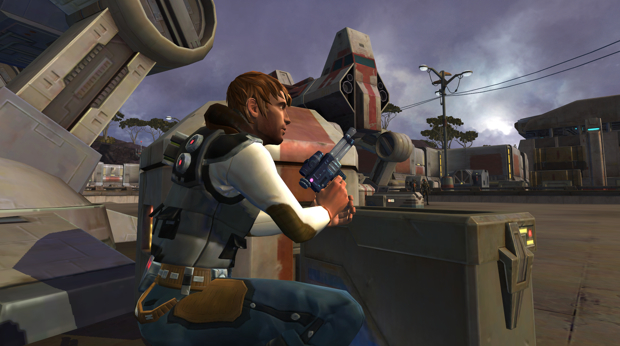 A few minutes ago I got the opportunity to see a live demo (hands off, unfortunately) of BioWare and LucasArts’ MMO, Star Wars: The Old Republic.

The focus of the first part of the two-part demo was on the Bounty Hunter class. It opened with a bit of story (unique to the class) that then morphed into a routine “kill them all”-type mission where the player was tasked with blasting groups of gun-toting brigands. The presenter stressed that the game — including the beginning — would always allow you to feel like the hero. In other words, you won’t grind against single enemies; always groups and always hectic.

Anyone familiar with a modern MMO will feel at home with SW: TOR’s combat system. Special power bubbles with numerals line the bottom of the screen and action is fairly relaxed, or at least, actions have a certain cool down time.

The second part of the demo dealt with the dialogue system. In this vertical slice, I saw one of BioWare’s dialogue-driven moral choices being made and was told (of course) that it would affect the rest of the game. The consequence of the action seemed only immediate; I can’t imagine BioWare would allow you to stay unhappy with a choice forever. Still, it was interesting to see, especially after witnessing the multiplayer dialogue system. (Other players you’re partied with will be in on the conversations for missions; It’s a way to make the narrative work for all parties.)

I also saw a bit of the recently announced Smuggler class. Like Han Solo, the smuggler class isn’t much of a defensive or aggressive type of character. Because of that, BioWare had to create something beautiful: a cover system specifically for the smuggler. (Little green indicators show you where you can duck; some special powers can only be activated from this position.)

By the way, the smuggler can kick enemies in the nuts. Awesome.