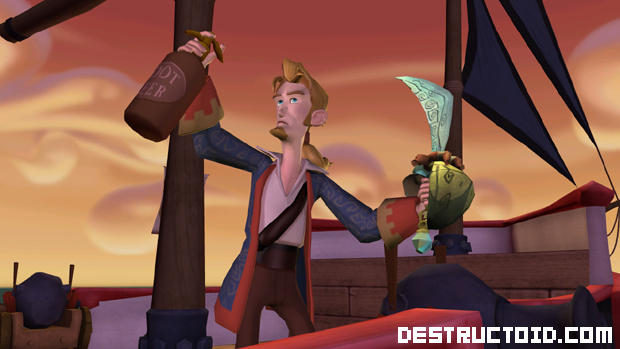 When I met with Telltale Games to take a first look at their upcoming series of Monkey Island episodic games, I was pleasantly surprised to have the opportunity to meet Dave Grossman, writer/programmer of The Secret of Monkey Island and Monkey Island 2: LeChuck’s Revenge. In our conversation, he revealed a highly exciting bit of information about the team working on the new series.

The Telltale offices are chock full of LucasArts talent who participated in the development of the series, which should give any fan more than enough hope for its continuation. Grossman, however, expressed a certain level of guilt about working on a Monkey Island title without the participation of Ron Gilbert who, along with Tim Schafer, rounds out the trio of people most responsible for the games’ success.

To hear Grossman tell the story, it sounds as though such guilt has been assuaged more than a little bit:

Once the ink was on the contracts and we didn’t have to keep the thing a complete secret from everyone in the industry, I called Ron and said, ‘I’m doing another Monkey Island game.’ Ron said that he was going to be in town in a couple of weeks and he’d cancel all of the things he had scheduled to do and just hang out in our offices. So, we had him for three days. He helped out with the story and designed a few puzzles for us.

I was already pretty damn excited to get a new Monkey Island in addition to the remake of Secret of Monkey Island. Now, I’m ecstatic, especially with all the other details about the game that I’m going to be bringing you a little later in a preview from the show. Stay tuned!