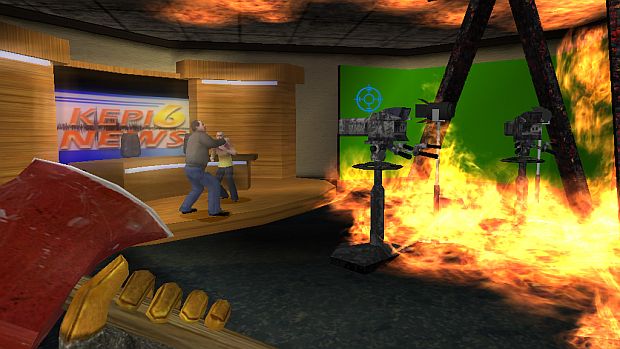 The last time I played a firefighting game was with an arcade game at some movie theater in Northern California. It was hella lame. However! We at Destructoid have a special place in our hearts for a game coming out August 4, Real Heroes Firefighter. It’s not that we particularly like the game or anything, it’s just that community member Kerry Cobuccio, (Naia-the-gamer for the ignorant) actually does voice work for the game!

So of course we’d immediately want to give the game some attention. I mean, it has an interesting premise. It really seems like the developers really want make a first person shooter where you save lives instead of taking them. Of course, the graphics are not the greatest (at all) and I found the controls to be a little stiff.

I also had a problem with getting around. Some of the levels are just so dark, which sort of fits with the general firefighting them, so getting from place to place was problematic. I did like the mechanic of breaking through walls to get to fires, and there is a certain sense of realism that’s appreciated. For example, you can only carry the hose so far (it’s coming from a wall, duh), and you’ll have to find a new hose point.

Honestly, it doesn’t seem like the worst sort of family game for $30. The graphics are pretty ugly, which is a drag, but at least the voice acting is amazing. Hearing Kerry’s voice from random characters was awesome and surreal. Very cool.