At its core, ModNation Racer is “simply a kart racer.” You’ve played them before, in games featuring everyone from Mario (Mario Kart) to Crash Bandicoot (Crash Nitro Kart) to Star Wars characters (Super Bombad Racing). So why be excited about “just another” kart game?

For one, Vancouver-based developer United Front Games set out to make their title, in their own words, a “thoroughly modern take on kart racing.” From a technical standpoint, that means what you’d expect — leveraging the power of the PlayStation 3 to deliver high definition graphics, real-time physics, and spot on kart handling and kart-to-kart collision detection.

But it’s the games wide creation toolset — one that empowers players by offering them control to customization their racers, cars, and even tracks from the ground up — that should make you take notice.

When the game was revealed at Sony’s E3 press conference, United Front’s William Ho and James Grieve rushed through the creation of a character and a simple track. What they showed was impressive, particularly the game’s on-the-fly track construction. In a behind-closed-doors demo today, Ho and Grieves slowed it down a bit, and showed us how ModNation Racers could turn gamers into mini Bob Ross-like track designers.

Ho and Grieves started off by showing us the game’s character creation, based heavily on the Urban Vinyl toy scene, which has spawned some of the most unique and amazing toy designs since the late 90s.

We saw Grieves start off with a blank figure, an “unpainted” doll. He browsed through a wide variety of pre-set parts (over 169 eyes were listed in the demo, for example), and then was given the ability to re-color, re-position, and re-size them accordingly. The result was a unique looking character, one that had a completely different vibe and feel than the pre-set characters initially.

Players can customize their karts in much the same way, selecting from a number of a diverse bodies and styles before molding it into their own unique vehicle. We saw muscle car bodies, a Mack Truck, and even a car made out of what appeared to be cardboard. 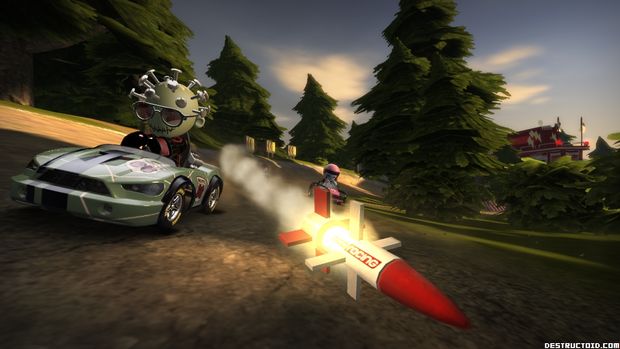 Next up was track design, the most remarkable aspect of the title. Laying down road looked effortless, intuitive, and most importantly, fun. Once a basic set of tools and landscape was selected, Grieves drove a kart using basic racing controls, and generated a track in real time. Once complete, he simply navigated a quick menu wheel to launch the track and give it a test run. Everything was laid down seamlessly, just as he had driven it, including the hills and bridges generated by the game. But it was a bit… boring.

So Grieves decided to add a little character, firing up the game’s editing tools, which can best be described as paint brushes, with the track being your canvas. He “painted in” the road, selecting cobblestone and dirt quickly from a menu to give it some life. He dropped in scenery, dragging a brush to lay down mountains and trees, all generated by the game on the fly. He was able to go back in and paint in short cuts, and drop power-up orbs wherever he wanted. He transformed a flat surface into a lake by lowering the terrain with a simple tool. Then after quickly testing the track and deciding he couldn’t see it enough when coming around a bend, raised the water level.

It looked easy, and it looked fast, a level created in a matter of minutes. The end result was a track that appeared to play well (the game’s A.I. adapted quite nicely, even aggressively taking out Grieves on turns), and looked like it was created with professional design tools. In fact, all of the tracks designed by United Front that appear in the game’s single-player experience were made with the very same tools that will ship with the game.

United Front’s William Ho stressed the exploratory nature, and watching Grieves design the track so quickly and with little effort demonstrated this quite nicely. He mentioned that the idea was to create a canvas, to give people brushes in which they could pain the world; Bob Ross would be proud of the ease in which players can splash in a landscape of “happy little trees.” 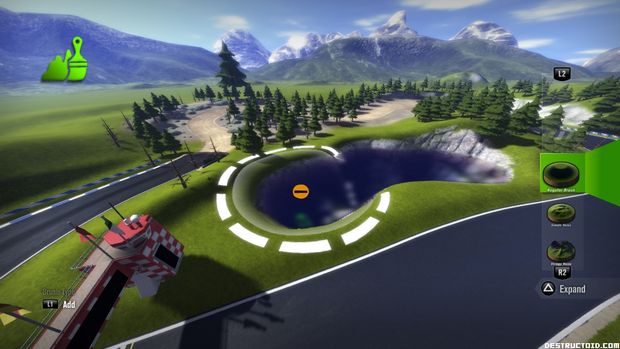 While the tools are designed to be simple to pick up and use, ModNation Racers has layers of design depth that should allow players more control when it comes to tweaking their designs, including single item placement, movement, and more.

Taking a page from LittleBigPlanet, everything you create can be shared online. While we didn’t see it in action. The final version of the game will feature a way to quick upload, download, and rate created tracks. And if you attempt to join a race with a created track you don’t currently own, the game will automatically and seamlessly download it to your PlayStation 3.

ModNation Racers looks like it intends to provide tools to players and designers that could make for a potentially limitless kart racing experience. The creation looks as robust as it is smooth and easy to use; with some inspiration, we could have some amazing, user-designed gameplay experiences with ModNation Racers. Nintendo take note: If United Front nails the basics racing gameplay, ModNation Racers would be the first kart racer to truly challenge Mario Kart’s throne.