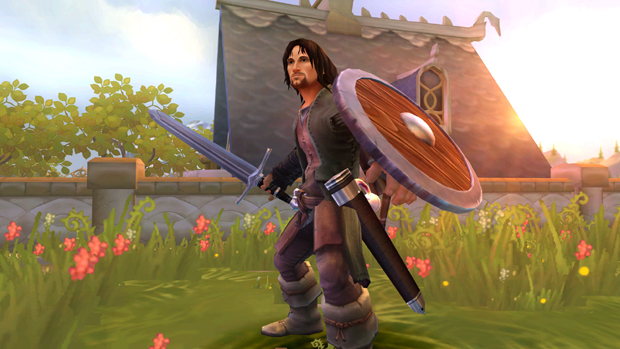 Warner Bros. took me on a tour of their E3 offerings this afternoon and I kicked things off by checking out their recently announced Lord of the Rings title. Having recently acquired the license from EA, I was wondering what Warner Bros. was going to do with the franchise. And, of course, the very first thing they do is put it on the Wii in a game subtitled, “Aragorn’s Quest.”

It’s pretty different from what EA had been releasing. Keep in mind that this is not a bad thing. It is just a different thing. I’m not quite sure exactly how I feel about this one and it’s probably too early for me to have a hard and fast opinion. Nevertheless, I’ll give you some general impressions of the title after the jump along with a trailer and some screenshots.

The very first thing I noticed about Aragorn’s Quest is that it does not graphically resemble any of the previous games to bear the Lord of the Rings banner. Where EA’s series of games were always clearly based on the Peter Jackson film series and featured a dark and gritty view of Middle Earth, Aragorn’s Quest is full of vibrant color. It’s clearly a ploy to appeal to a larger, more family-friendly demographic. It is the Wii, after all.

The game is presented in a 3rd-person perspective and features all the waggle controls you would expect. Swinging the Wii remote swings Aragorn’s sword while the moving the nunchuk is used for his secondary equipment. He can wield a shield, bow and other items and these are easily switched using the directional pad on the remote.

One cool feature are Aragorn’s charged attacks with the sword. By holding down the Wii remote’s trigger prior to swinging the remote, he’ll perform a powerful flourish attack. A nice touch that demonstrates that the designers aren’t bieng lazy with this is that the flourish moves vary depending on the manner in which you waved that wonderous white wand.

It isn’t a game that I’m personally all that interested in playing through but they didn’t design it for me. It looks like a title that I probably would have wanted to play and quite possibly might have enjoyed if I fell into the target audience of pre-teens. I might keep an eye on it just to see if it winds up being a solidly designed game overall, since there’s so often a drought of third-party games for kids that aren’t just chewed up and spit out by publishers.

Filed under... #E3#Gallery#Lord of the Rings