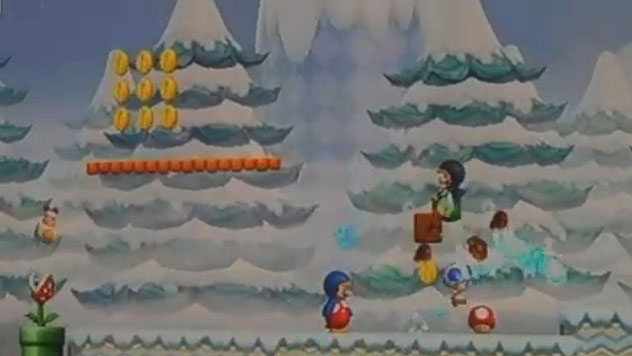 If you were playing close attention to the trailer for New Super Mario Bros. Wii, you might have noticed a few of the suits available. There’s the Propeller Suit, highlighted in Nintendo’s Tuesday morning press conference. But it doesn’t stop there.

Nintendo has more up its sleeve, though, as Team Mario also has access to a Penguin Suit, as shown briefly in the trailer. You can find it in one of the game’s 10 levels that playable on the show floor, and after demanding the person in front of us demo it, we had a chance to see just what it was capable of.

The cute little suit lets Mario and friends slide on their bellies across ice, useful for quick travel and access to areas otherwise unreachable. But its the suits offensive ability, the ice fireball — capable of turning enemies into blocks of ice — that was turning heads on the show floor.

Check out our quick, shakey-cam footage of the Penguin Suit from the show floor after the jump. And don’t miss our amazing hands-on preview.